I am always intrigued by the amount of strange and wild places to visit on this earth. Thought I would give you a short list of some of the most unusual ones:

Spotted Lake has long been revered by the native Okanagan (Syilx) people and it’s easy to see why they think of it as sacred. In the summer the water of the lake evaporates and small mineral pools are left behind, each one different in colour to the next. The unique lake can be viewed on Highway 3, northwest of the small town of Osoyoos, although visitors are asked not to trespass on tribal land.

In rough conditions at Thor’s Well, also known as Spouting Horn, the surf rushes into the gaping sinkhole and then shoots upwards with great force. It can be viewed by taking the Captain Cook Trail from the Cape Perpetua Scenic Area visitor centre – but for your own safety stay well back, especially at high tide or during winter storms. 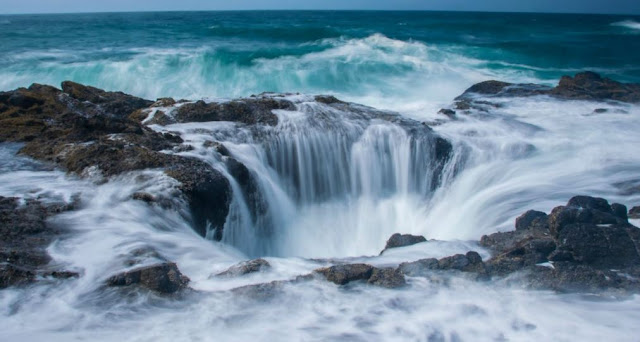 A remarkable UNESCO World Heritage Site in southwest Turkey, a visit to Pamukkale (Cotton Palace) also takes in the ancient ruins of Hierapolis, the once great city that was built around it. Water cascades from natural springs and down the white travertine terraces and forms stunning thermal pools perfect for a quick dip. This remarkable lake was discovered in 1802 on the largest of the islands in Western Australia’s Recherche Archipelago. The lake keeps its deep pink colour year-round, which some scientists say is down to high salinity combined with the presence of a salt-loving algae species known as Dunaliella salina and pink bacteria known as halobacteria. 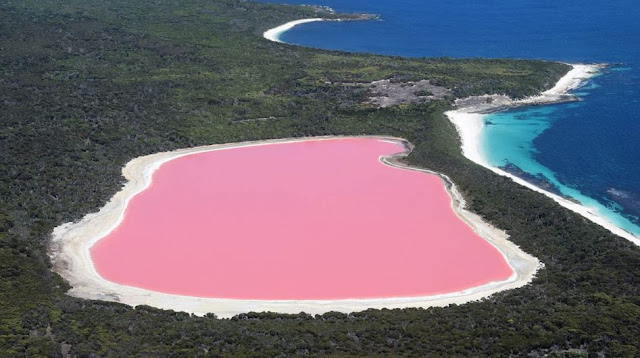 THE TIANZI MOUNTAINS, CHINA
Found in the northwest of Hunan Province in China, these staggering limestone pinnacles are covered in lush greenery and often shrouded in mist. A cable car goes as far as Huangshi village and from here there are plenty of trails to take in the breathtaking views of Tianzi (‘son of heaven’); unsurprisingly the inspiration for the floating mountains in the blockbuster movie Avatar. 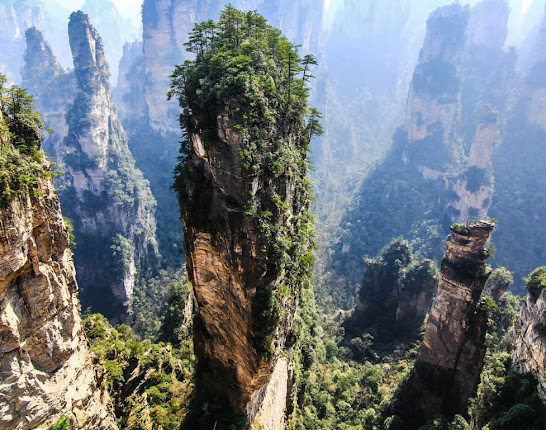 THE NASCA LINES, PERU
The animal figures and geometric shapes etched by the ancient Nasca into Peru’s barren Pampa de San José are one of South America’s great mysteries. Visible only from the air or from a metal viewing tower beside the highway, some of the unexplained shapes are up to 200m in length and each one is executed in a single continuous line. 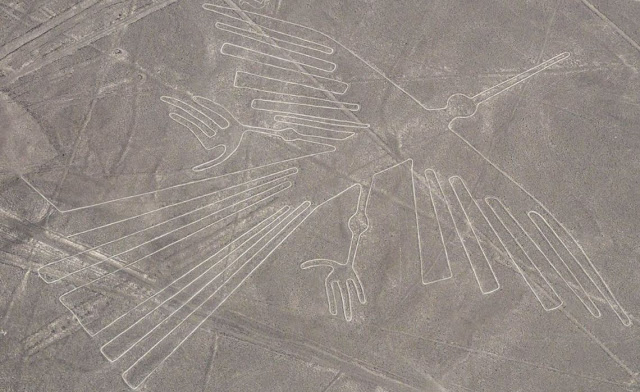 RED BEACH, PANJIN - CHINA
Very cool and very weird, this beach is covered in a type of seaweed called Sueda, which turns bright red in autumn. Thirty kilometres southwest of Panjin, these tidal wetlands are an important nature reserve for migrating birds. Only a small section of the beach is open to the public, but it can be explored via a wooden walkway that stretches out to sea.

GLASS BEACH, CALIFORNIA - UNITED STATES
This glittering sea glass beach in California is a remarkable side effect of years of rubbish being dumped on the beach; it wasn’t until the 1960s that this was stopped and by then the sea was full of everything from electrical appliances to bottles and cans. Over time, the waves broke everything down into colourful pebbles and the beach became a major tourist attraction – now ironically under threat because visitors are taking home the glass. 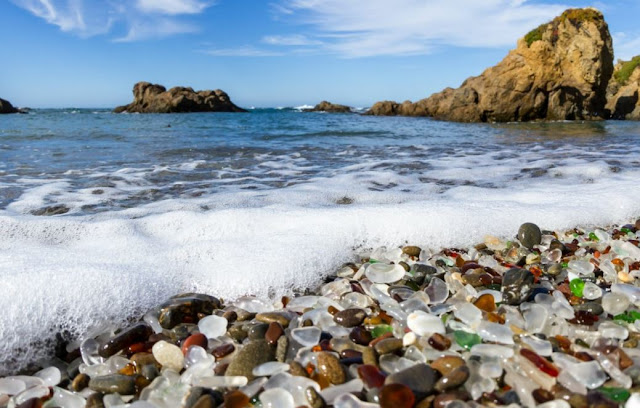 The deeply creepy catacombs are a network of old quarry tunnels beneath Paris and the final resting place of around six million Parisians. Most are anonymous, skulls and bones taken from the city’s overcrowded graveyards during the eighteenth and nineteenth centuries; it wasn’t until the authorities realized its potential as a tourist attraction that the bones were arranged in the macabre displays seen today. 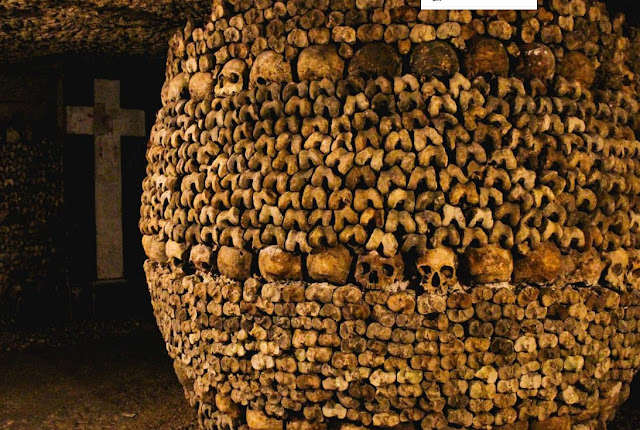 This otherworldly geyser is on private land on the edge of Black Rock Desert in Nevada. Created accidentally in 1964 after an energy company drilled down into geothermal waters, today a scalding fountain erupts up to five feet high and the resulting mineral build up means the cone is growing by several inches each year. The brilliant hues of red and green are down to thermophilic algae. 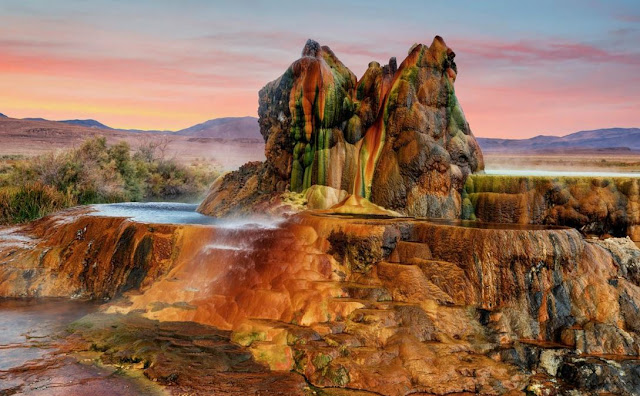 A short ferry ride from Japan’s east coast, Tashirojima has a population of one hundred humans who are vastly outnumbered by their furry friends. Originally the cats were encouraged as the island produced silk and mice are a natural predator of silkworms. Local fishermen regarded them as good luck and the island even has a cat shrine, along with newly built cat shaped cabins for tourists to stay in. It goes without saying that there are no dogs allowed. 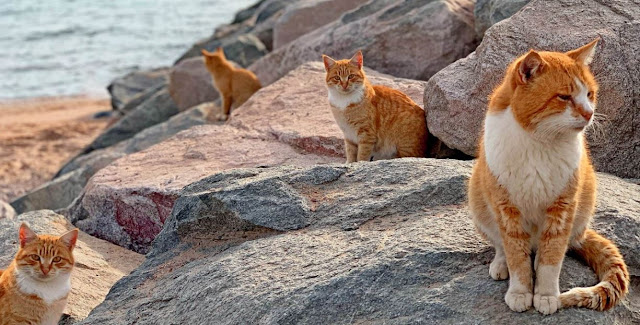 Shrouded in myth, megalithic stone jars are scattered across Xieng Khouang Province in groups from one to one hundred. A working theory is that the huge cylindrical jars were used in ancient funeral ceremonies, though local legend has it that the jars were used to brew rice wine for giants. In the 1960s Northern Laos was subject to a massive aerial bombardment by the USA and it’s only been relatively recently that some areas have been cleared and declared safe for visitors. 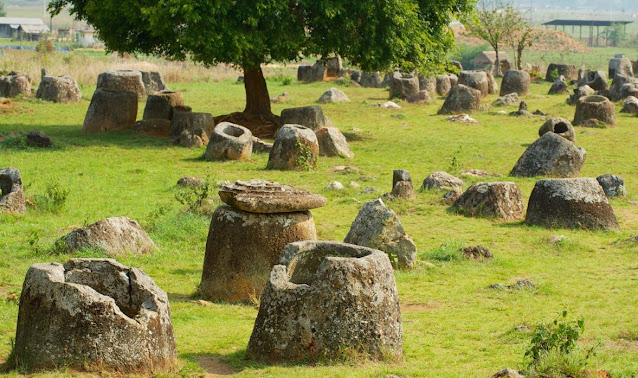 THE HAND IN THE DESERT, CHILE

Chilean sculptor Mario Irarrázabal is responsible for this very weird work of art rising out of the sand in the middle of Chile’s Atacama desert, 46 miles south of the city of Antofagasta. Irarrázabal is known for his works associated with human suffering and this huge unnerving sculpture captures a feeling of loneliness, exacerbated by its desolate and secluded location. 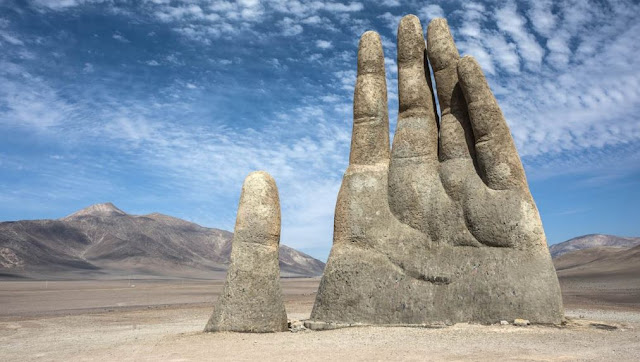 Hope you enjoyed these! Please leave a comment if you have the time and if you have a place you would like me to write about, drop me a line at francine@grandexplorer.com