I arrived in Lyon right on time at around 08:00AM. It was a beautiful day, warm and sunny. I was hoping it would be cooler but I can't complain.

Lyon is the ancient capital of Gaul with a rich history of more than 2000 years. There still exists today evidence of its long past, in landmarks such as the Gallo-Roman Amphitheatre and its 15th century cathedral at Saint-Jean.

People lived on the banks of the Saone River for several centuries before the city was officially founded by the Romans in 43 BC. Lyon served as their capital and nearly became the capital of France!

I was excited to stay at my beautiful hotel the "Cours Des Loges" situated in the historic Old Town. It's always fun for me to stay in Old World style hotels, I find you feel more like you are in Europe. 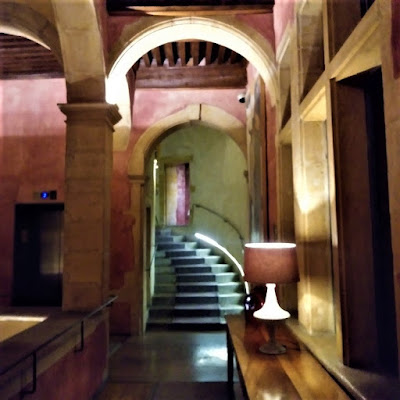 My room is amazing with a high wooden-beamed ceiling, Venetian Plaster walls and frescoes. Soooo cozy and so how I like to live in Europe. 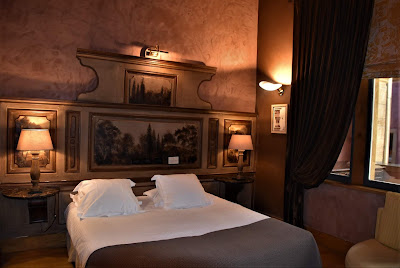 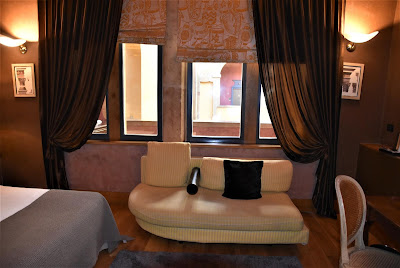 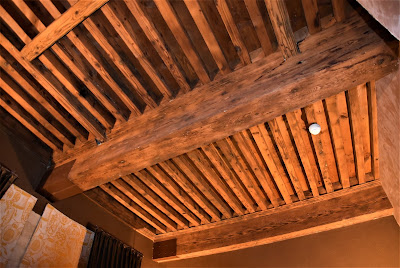 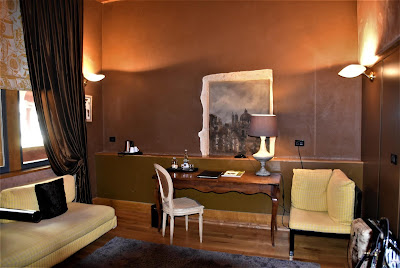 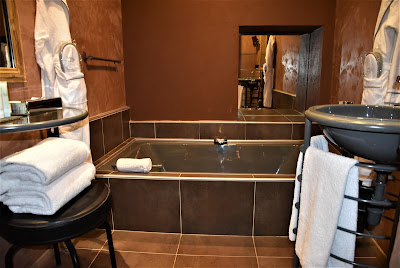 Since rooms are not usually ready until 3:00PM I went out to explore this beautiful city until my room was ready. The first thing you notice is how colorful all the restaurants and shops are. They have whimsical paintings on their windows and enticing menus displayed out front. You really feel like you're in a city taken back in time.

You're also stirred by the wonderful smells of this city. Baked goods shops are everywhere and as you pass them you get whiffs of fresh bread mixed with ginger and cinnamon as well as the aroma of crepes being made in a kiosk by the side of the street accompanied by the aroma of fresh-brewed coffee......Lyon is waking up to a new day. 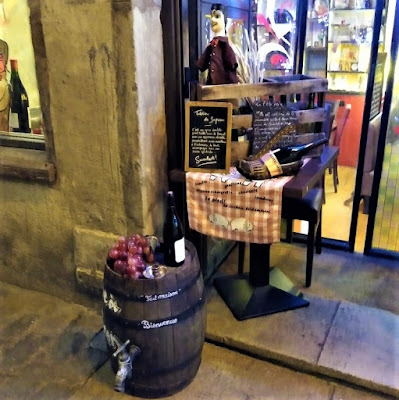 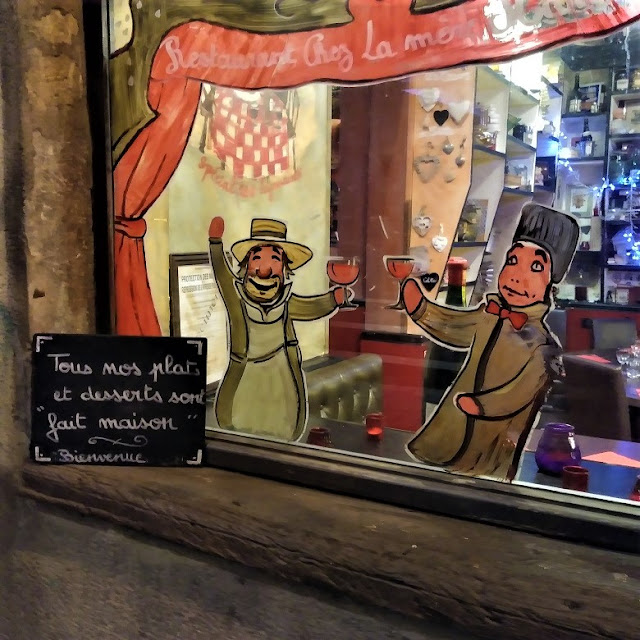 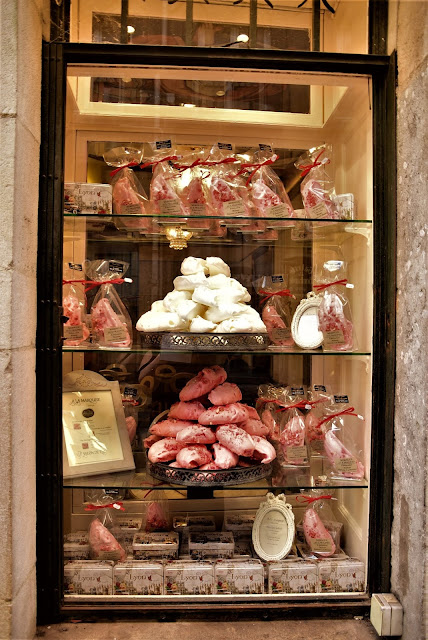 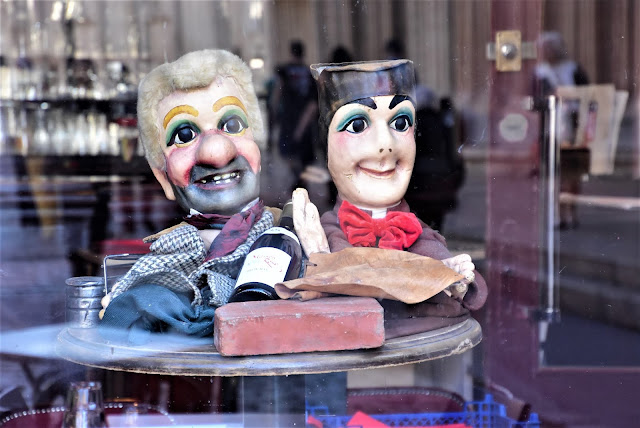 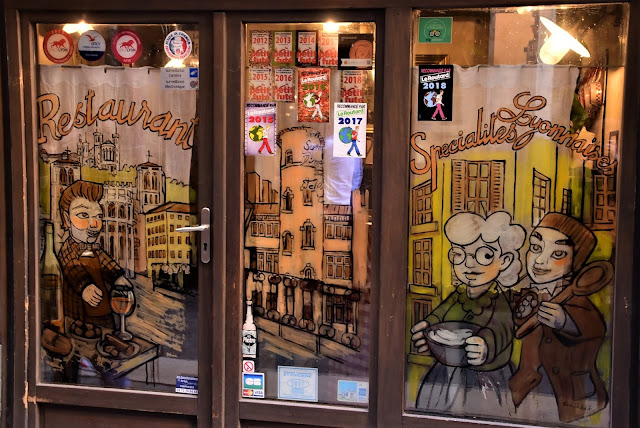 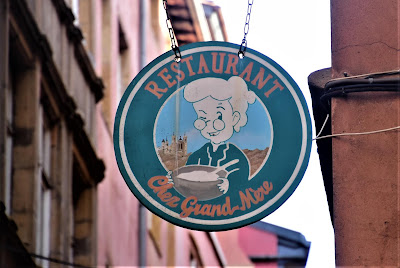 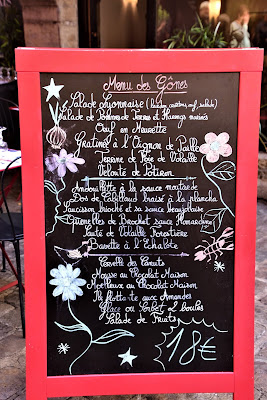 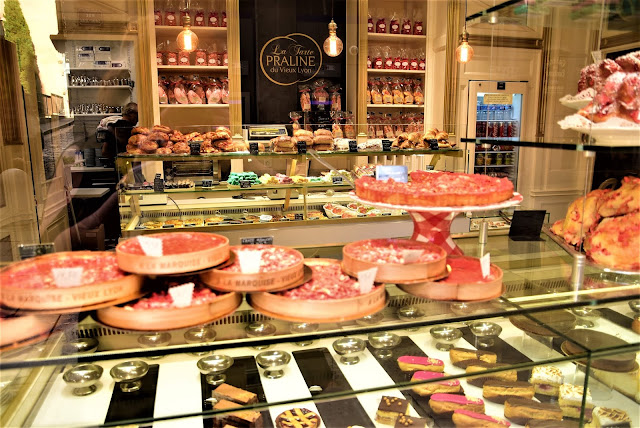 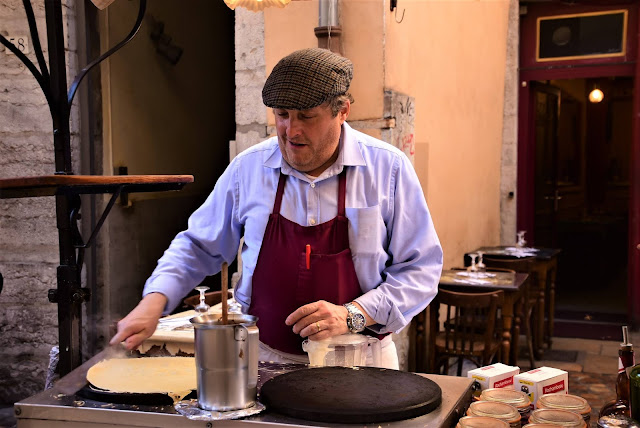 I made my way to the tourist office to pick up my Lyon City Card which gives you access to all the transportation in the city as well as an hour long cruise around the town and free entrances to most museums, this is a great deal.

Took the time to take some shots of this picturesque city along the way. 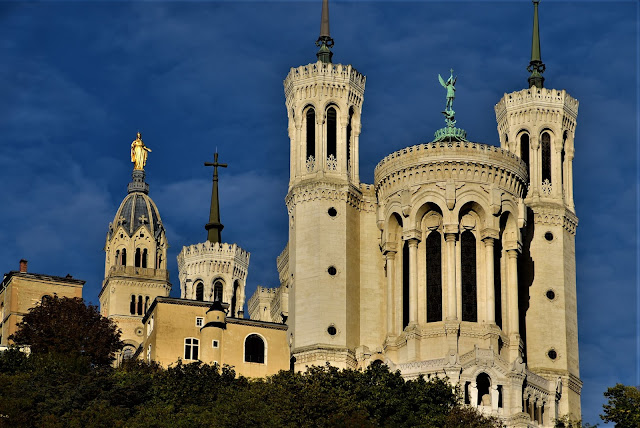 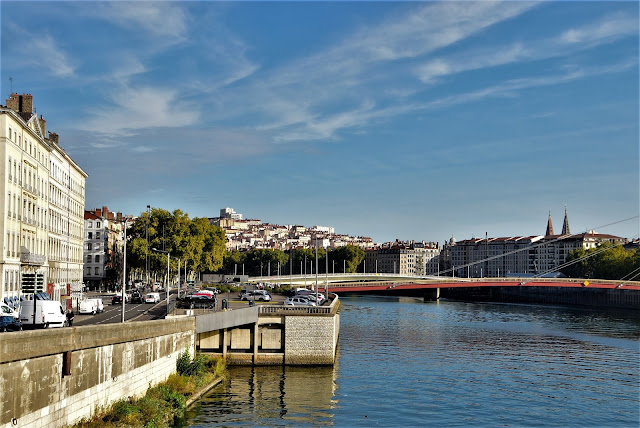 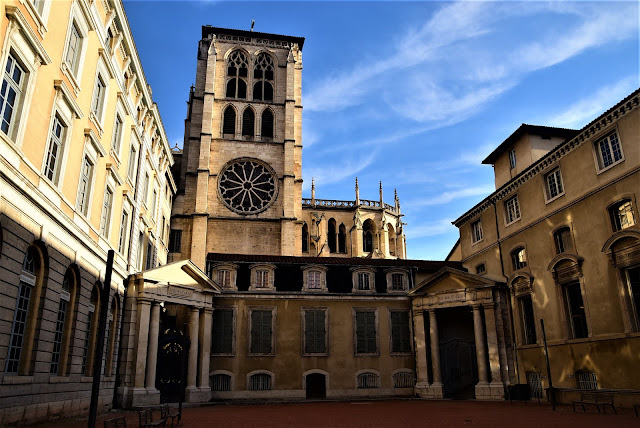 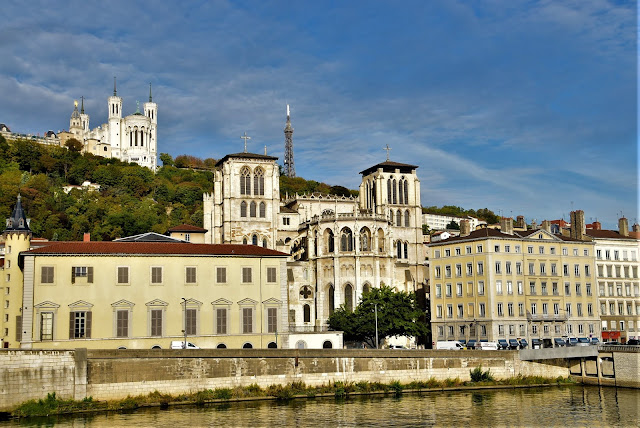 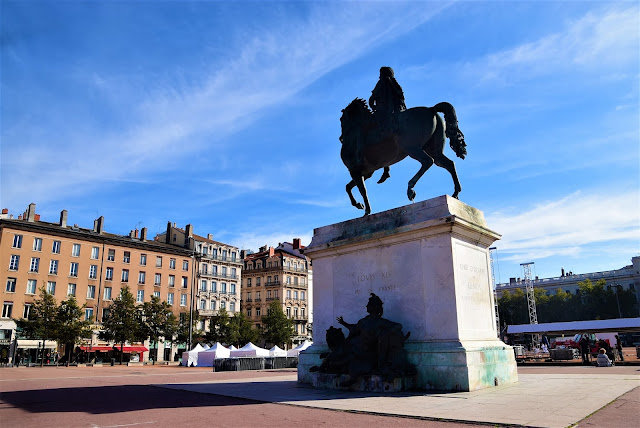 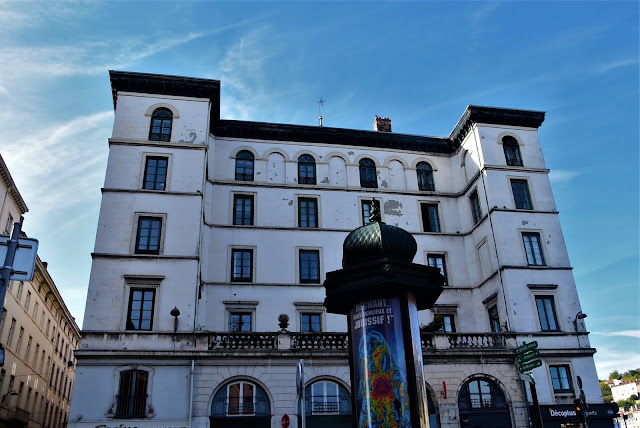 I came upon a homeless woman and her dog, she seemed to be more concerned about her dog than herself and she was feeding him bread and was petting him so gently. It tugged at my heartstrings so I gave her a few Euros. She was so ecstatic and could not stop thanking me for what I felt was such a small offering. Made me realize how much we take our good lives for granted. When I saw the look of sadness in her dog's face I felt kinda guilty for enjoying myself on such a nice trip and thought of my pampered little one back home in her doggy hotel.....such a life contrast. 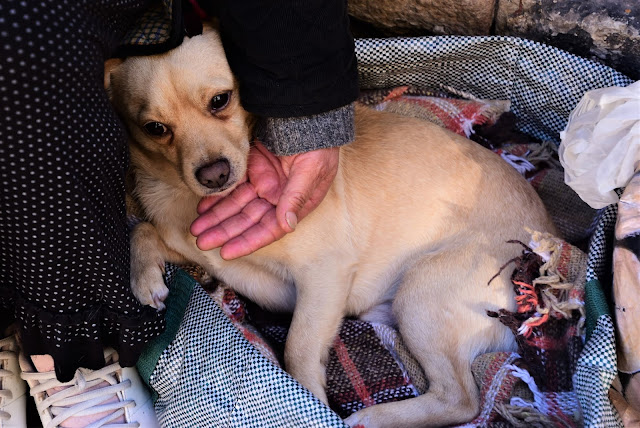 At around noontime I called the hotel to see if perhaps my room might be ready ahead of time and luckily it was so I headed back towards Les Cours Des Loges for a much needed few hours of sleep.

I slept for most of the afternoon and then relaxed and read some more and finally got ready for dinner. I wandered into the most charming little restaurant, La Chimere, very close to the hotel (there must be 30 quaint restaurants in the area).
The food and atmosphere was incredible. I was lucky to get a cute table near the front and I could watch people strolling by. 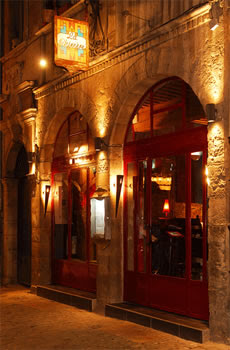 The food was amazing, I had large snails and then a pork tenderloin served with a mustard peppercorn sauce which was to die for! To end I had a baba au rhum and she actually asked if I wanted extra rum on it and when I said yes, she brought an entire rum bottle and left it on my table..lol 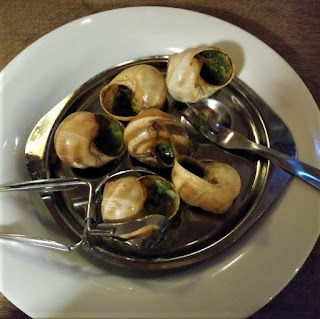 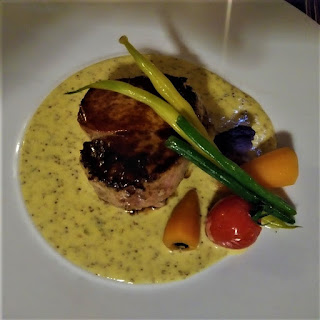 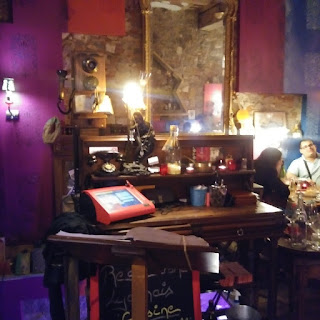 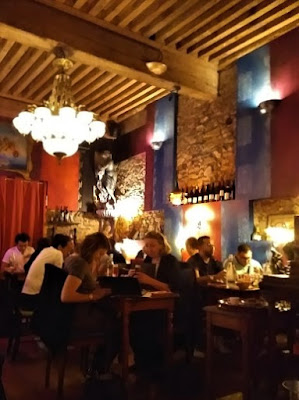 After that great meal I walked back to the hotel looking forward to a good night's sleep. I met a nice man walking his two small Maltese dogs and of course I had to stop and talk to him. They were so well behaved and listened when he told them to stay off the center of the street, so cute. If my little Miquette were here she'd have run off half way to Marseille before listening to me...lol. 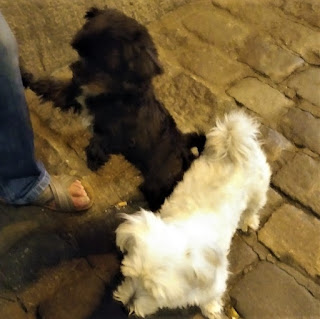