Today we arrived at Piraeus, Greece the main port for Athens. 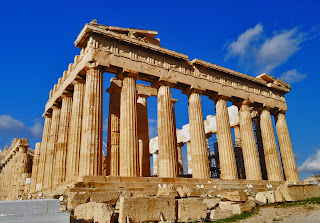 Athens has been the center of Greek civilization for some 4,000 years. The capital of modern Greece, it’s still dominated by 5th-century-B.C.E. landmarks, including the Acropolis, a hilltop citadel topped with ancient buildings such as the colonnaded Parthenon temple. But it’s also a contemporary city, and it’s not uncommon for the nightlife hubs of Kolonaki, Psiri and Gazi to stay busy until dawn. 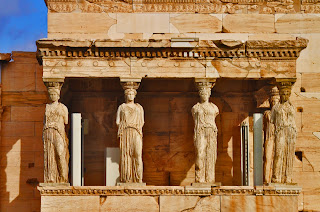 Athens is the historical capital of Europe, with a long history, dating from the first settlement in the Neolithic age. In the 5th Century BC the culmination of Athens’ long, fascinating history, the city’s values and civilization acquired a universal significance. Over the years, a multitude of conquerors occupied Athens, and erected unique, splendid monuments. In 1834, it became the capital of the modern Greek state and in two centuries since it has become an attractive modern metropolis with unrivalled charm. A large part of the town’s historic centre has been converted into a 3-kilometre pedestrian zone (the largest in Europe), leading to the major archaeological sites (“archaeological park”), reconstructing – to a large degree – the ancient landscape. 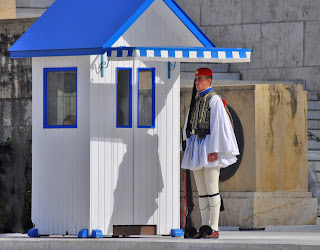 We then continued our city tour and saw the changing of the guard. We were lucky to be there a few minutes before the start. At 11 am, people gather in Syntagma Square to watch the official changing of the guards, the military unit whose members stand proudly in perfect stillness in front of the Hellenic Parliament. The Evzones is a special unit of the Hellenic Army, also known as Tsoliades, who guard the Monument of the Unknown Soldier in front of the Hellenic Parliament and the Presidential Mansion. Through the historical movement of Greece, the Evzones have become symbols of bravery and courage for the Greek people. The Presidential Guard, as the unit is now called, was constituted in 1868 and has taken many names through centuries (Guard of the Flag, Royal Guard, etc). 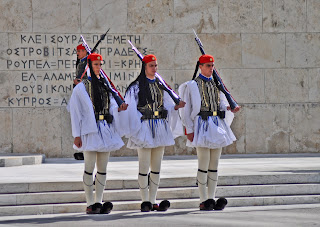 The duties of the soldiers are part of a ceremonial nature. Every soldier guards for about an hour, 3 times in total every 48 hours. Throughout these 60 minutes, they have to stand perfectly still until it is time to switch with another guard. During the changing, they work in pairs so they can perfectly coordinate their moves. The steps that the official ceremony requires at the time of changing are carried out in really slow motion to protect their blood circulation after 60 min of immobility. The soldiers of the Presidential Guard are selected according to their height, excellent physical condition and psychological state as well as character and morality, as they follow a hard training before they become part of this honorary unit. The training lasts for one month and includes exercises to keep the body and mind still. Apart from staying still, the soldiers must also not make any face or eye move and must not show any expression. 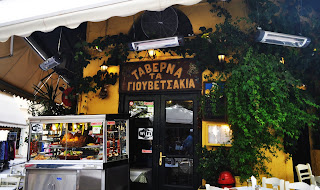 After viewing the changing of the guard we went to the Plaka, my favorite neighborhood in Athens, for lunch. In the shadow of the Acropolis, the Plaka is like a village within the city, an island for those who don't have the time to visit the Greek Islands. The Plaka is the oldest section of Athens. Most of the streets have been closed to automobile traffic. At one time it was the nightclub district, but most of these closed down when the government outlawed amplified music in the neighborhood in the seventies in an effort to get rid of undesirables. The strategy was very successful and it is now an area of restaurants, Jewelry stores tourist shops, and cafes. Though it is quite commercialized it is still a neighborhood and arguably the nicest neighborhood in central Athens. Most of the restaurants are typical tourist places but the quality of food is still good. We stopped in a cute restaurant and I had Moussaka which I love.

After lunch we wandered around doing some shopping. Most of the shops have pretty much the same stuff for pretty much the same prices but there are some that are more eclectic than others that sell antiques, or actual hand painted icons, wood carvings and paintings which are quite beautiful. We found lots of different types of shops and even the regular tourist shops have amazing postcards that are beautiful enough to frame. There are lots of jewelry stores and some that are artist-owned which have hand-made original pieces and also copies of ancient museum pieces such as Greek coins.

We eventually headed back to the ship for another evening of gourmet dining, a great show and an early night to bed after a full day.