We were scheduled to visit Istanbul but a few days prior, due to some security concerns from the Turkish election, the schedule was changed and we docked instead in Santorini, Greece. 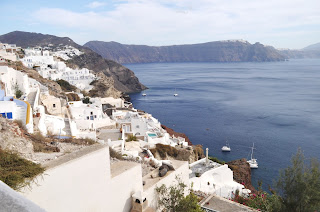 Undoubtedly the most extraordinary island in the Aegean, crescent-shaped Santorini remains a mandatory stop on the Cycladic tourist route, even if you must enjoy the sensational sunsets from Ia, the fascinating excavations, and the dazzling white towns with a million other travelers. Called Kállisti (the "Loveliest") as long ago as ancient times, the island has now reverted officially to its subsequent name of Thira, after the 9th-century-BC Dorian colonizer Thiras. The place is better known these days, however, as Santorini, a name derived from its patroness, St. Irene of Thessaloniki, the Byzantine empress who restored icons to Orthodoxy and died in 802. 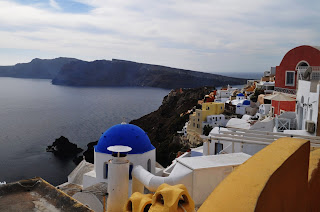 After the boat sails between Sikinos and Ios, your deck-side perch approaches two close islands with a passage between them. The bigger one on the left is Santorini, and the smaller on the right is Thirassia. Passing between them, you see the village of Ia adorning Santorini's northernmost cliff like a white geometric beehive. You are in the caldera (volcanic crater), one of the world's truly breathtaking sights: a crescent of cliffs rising 1,100 feet, with the white clusters of the towns of Fira and Ia perched along the top. The bay, once the high center of the island, is 1,300 feet in some places, so deep that when boats dock in Santorini's shabby little port of Athinios, they do not drop anchor (as if placed there to emphasize the depths, a sunken ocean liner lies eerily submerged beneath the surface). The encircling cliffs are the ancient rim of a still-active volcano, and you are sailing east across its flooded caldera. On your right are the Burnt isles, the White isle, and other volcanic remnants, all lined up as if some outsize display in a geology museum. Hephaestus's subterranean fires smolder still—the volcano erupted in 198 BC, about 735, and there was an earthquake in 1956.

Indeed, Santorini and its four neighboring islets are the fragmentary remains of a larger landmass that exploded about 1600 BC: the volcano's core blew sky high, and the sea rushed into the abyss to create the great bay, which measures 6 miles by 4½ miles and is 1,292 feet deep. The other pieces of the rim, which broke off in later eruptions, are Thirassia, where a few hundred people live, and deserted little Aspronissi ("White isle"). In the center of the bay, black and uninhabited, two cones, the Burnt Isles of Palea Kameni and Nea Kameni, appeared between 1573 and 1925. 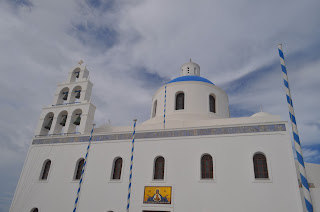 There has been too much speculation about the identification of Santorini with the mythical Atlantis, mentioned in Egyptian papyri and by Plato (who says it's in the Atlantic), but myths are hard to pin down. Since antiquity, Santorini has depended on rain collected in cisterns for drinking and irrigating, the well water is often brackish and the serious shortage is alleviated by the importation of water. Nevertheless, the volcanic soil also yields riches: small, intense tomatoes with tough skins used for tomato paste (good restaurants here serve them); the famous Santorini fava beans, which have a light, fresh taste; barley; wheat; and white-skin eggplants. 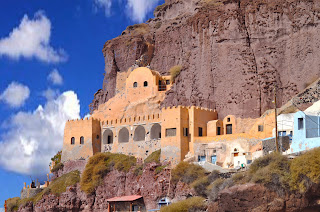 These days, unrestrained tourism has taken a heavy toll on Santorini. Fira, and now Ia, could almost be described as "a street with 40 jewelry shops"; many of the natives are completely burned out by the end of the peak season (the best times to come here are shoulder periods); and, increasingly, business and the loud ringing of cash registers have disrupted the normal flow of Greek life here. For example, if a cruise ship comes in during afternoon siesta, all shops immediately open. Still and all, if you look beneath the layers of gimcrack tourism, you'll find Greek splendor. 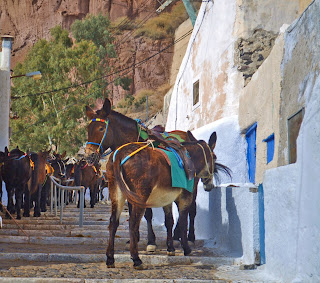 There are two ways to get to the town when approaching by water, you either take the steep cable-car or you ride up the mountain on the back of a donkey...I opted for the cable car, lol.

Once I reached the top and left the cablecar I wanted to make my way to Oia. Most of the pictures in guide books and calendars of Greece feature images from Oia. Oia reached the peak of prosperity in the late 19th and early 20th centuries. Its economic prosperity was based on its merchant fleet, which plied trade in the Eastern Mediterranean, especially from Alexandria to Russia. The two-story captains' houses built on the highest part of the village are a reminder of the village's former affluence. Part of the town was destroyed by the 1956 earthquake. It extends for almost 1.2 miles along the northern edge of the caldera that forms the island of Santorini, at a height of between 230 and 330 ft above sea level.

It is built on the steep slope of the caldera and the houses and restaurants are built into niches carved into the caldebra on the seaward side. There are narrow passageways and a central square. The sun light hours in this village are much longer than in the Fira town. Its paths are very narrow and hence gets congested during the tourist season. The idyllic surroundings of the town have a complex of white washed blue domed churches and charming, traditional Cycladic houses and cave houses that are carved into the rock face on top of the cliff. It is set in a location which provides excellent views of the sunset over the caldera.

Once I spent some time in Oia I returned to the cable-car for my descent to get back to the ship. This was a beautiful day on a fairytale island.