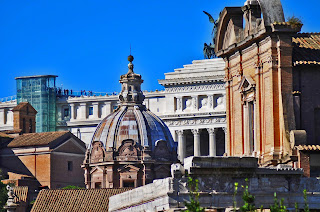 After an 8 hour flight we finally arrived in Rome! This is a fascinating city and is without a doubt one the most beautiful cities in the world; every year millions of tourists come from around the world to admire the treasures and masterpieces of Roman art and architecture.

Monuments from the capital’s glorious past are everywhere, from ancient Roman remains to the beautiful baroque churches. There is no shortage of things to do in Rome: you can relax in the city’s elegant squares, explore the narrow alleyways of the city center, stroll along the main shopping streets, and uncover the quirks of what is still identifiably a collection of ages and architectural styles.

In Rome you are surrounded by cafes filled with locals and tourists alike, the sound of scooters everywhere and the mass of cars that go at breakneck speeds on narrow cobbled-stone streets. Every car has either a dent or a scratch. 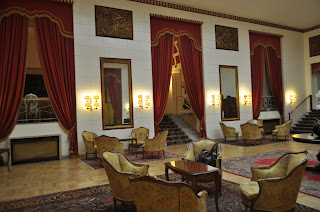 I stayed at the Quirinale Hotel which is a 4-star property in a great location in central Rome close to all the attractions and around the corner from Piazza Rebublica. This is an Old-World style hotel which is my favorite kind. You are surrounded by antiques and this makes you feel like you are really in Europe. Our room was an Executive suite with a beautiful Murano crystal chandelier, high ceiling and a large all marble bathroom...just beautiful. The window overlooked the garden below with statues, flowers and lovely tables for dining. After a little refreshing we were off to explore this amazing city. 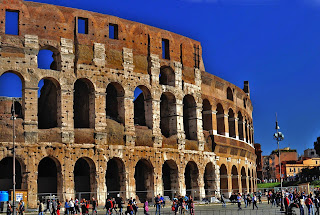 I purchased a Hop-On-Hop Off pass which is the best way to see the city. You can get off where you want and stay as long as you like and take the next tour bus on the route to your next preferred stop. Our first stop was the Colosseum, probably the most recognizable monument in Rome. It was a beautiful warm day and the sun was shining. After some time there we proceeded to Piazza Navona.


Piazza Navona is one of the most famous and arguably the most beautiful of Rome's many squares. The large and lively square features no less than three magnificent fountains. Another eyecatcher is the Baroque church of Sant'Agnese in Agone. The square is built on the former Stadium of Domitian, built by Emperor Domitian in 86 AD. Hence the long, oval shape of the square. The stadium, which had a larger arena than the Colosseum was mainly used for festivals and sporting events. The main attraction of Piazza Navona is the trio of fountains that adorn the square. 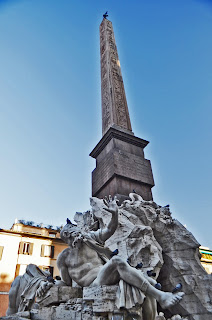 The central and largest fountain is the Fontana dei Quattro Fiumi (Fountain of the Four Rivers). It was constructed between 1647 and 1651 on request of pope Innocent X. The design of the fountain was first commissioned to Borromini, but it was ultimately handed to his rival Bernini. The fountain features four figures, each representing a river from a different continent - the Nile, Ganges, Danube and Rio de la Plata. The statues are at the base of a rock supporting an obelisk, originally located at the Circus of Maxentius, near the Appian Way. 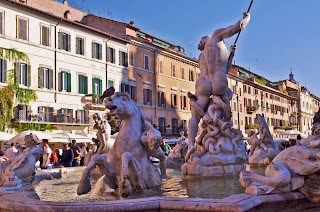 The Fontana del Nettuno, also known as the Calderari, was built in 1576 by Giacomo della Porta. The statues of Neptune surrounded by sea nymphs were added in the nineteenth century.

Giacomo della Porta also built the Fontana del Moro. The central statue of a Moor holding a dolphin, a design by Bernini, was added in the seventeenth century. The tritons are nineteenth-century additions.

We took a seat at a sidewalk cafe and had a great pizza while watching tourists and locals alike stroll the Piazza. After some shopping for watercolors we were off to continue our tour. 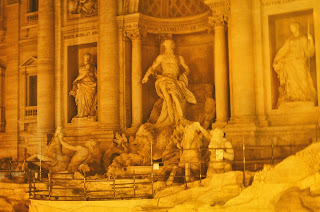 We made our way to the Trevi Fountain and although it was still surrounded by glass and no water was running we saw it without scaffolding which was great. It was already dark out so it was hard to get a great shot. We missed the grand opening by only a few days!

The Trevi Fountain is situated at the end of the Aqua Virgo, an aqueduct constructed in 19 BC by Agrippa, the son-in-law of Emperor Augustus. The aqueduct brings water all the way from the Salone Springs, approx. 21km from Rome, and supplies the fountains in the historic center of Rome with water.

According to legend, Agrippa sent out a group of soldiers to search for a spring near Rome. The spring was found after a young virgin (virgo) showed the source to the soldiers, hence the name of the aqueduct. 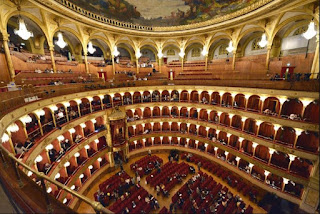 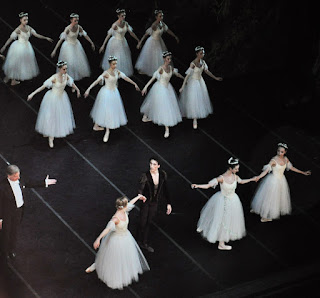 We headed back to the hotel to relax and change since we had ballet tickets.
We went to Theatro Dell' Opera Di Roma to see the ballet "Giselle".  It's a beautiful old theatre and we had a private box with seats covered in red velvet. There are dozens of crystal chandeliers and it was exciting to think we were sitting where centuries before royalty sat & saw the same performance.

The ballet is about a peasant girl named Giselle, who dies of a broken heart after discovering her lover is betrothed to another.

The Wilis, a group of supernatural women who dance men to death, summon Giselle from her grave. They target her lover for death, but Giselle's great love frees him from their grasp.