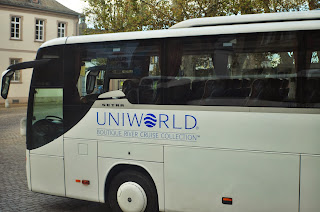 This morning the sun was out again as we docked in Germersheim (Speyer) Germany. We boarded the Uniworld motor coach which is a beautiful Mercedes Benz coach with panoramic windows. Off we went to visit the fairytale town of Heidelberg.

It's no secret that Heidelberg is a jewel among German travel destinations. Heidelberg is located in the Neckar river valley right where the legend-rich Odenwald (Forest of Odes or Odin) opens up towards the plains of the Rhine Valley. Heidelberg is home to the oldest university in Germany (est. 1386). With 28,000 students, the Ruprecht-Karls-University is one of Germany's larger academic institutions and boasts the full spectrum of an ancient academy, from Egyptian Studies to Computer Linguistics. The faculties for Medicine, Law and Natural Sciences are considered to be among the best in Germany. 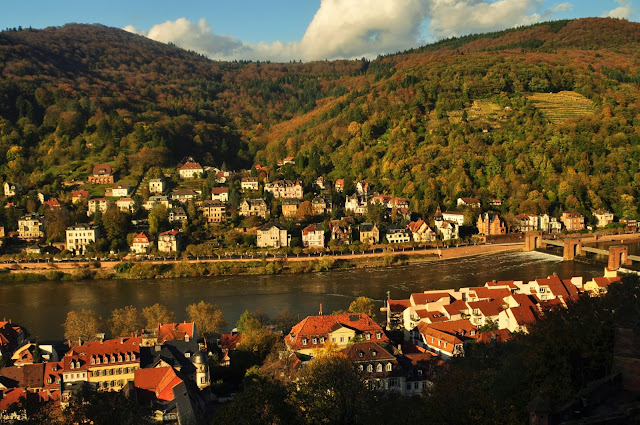 During WWII, the city was almost completely spared allied bombings which destroyed many of Germany's larger inner cities. As a result, Heidelberg has retained its baroque charm of narrow streets, picturesque houses and of course the world-famous Schloss (castle ruins). Heidelberg's 147,000 inhabitants thus include not only 28,000 students at the university but also nearly 30,000 US citizens, almost all of them soldiers and their families. With hundreds of thousands of tourists flocking to the city annually, Heidelberg is truly a culturally diverse and international destination, despite its small size. 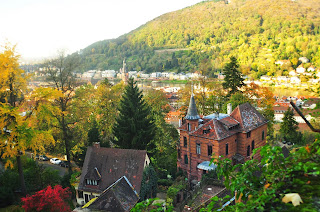 Over the years, Heidelberg has attracted numerous artists, intellectuals and academics from all over Europe and has sometimes been referred to as Germany's unofficial intellectual capital. People who have lived and worked in the city include the poets Joseph von Eichendorff, Jean Paul, Goethe and Iqbal, scientists such as Bunsen and Kirchhoff, philosophers such as the founder of the "Illuminati" order von-Knigge, atheist Ludwig Feuerbach, architect Albert Speer, and many more. Mark Twain wrote in "A Tramp Abroad":
...Out of a billowy upheaval of vivid green foliage ...rises the huge ruin of Heidelberg Castle, with empty window arches, ivy-mailed battlements, moldering towers—the Lear of inanimate nature—deserted, discrowned, beaten by the storms, but royal still, and beautiful. 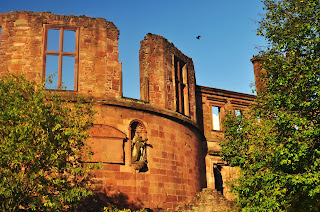 Heidelberg Castle is the most famous castle ruins in the world. Since the 19th Century the epitome of German romanticism for tourists from all over the world. The impressive ruins annually attracts around one million visitors. In the 16th and 17 centuries Heidelberg Castle was one of the most magnificent palaces in Europe.

It would be hard to imagine a more striking location: set against the deep green forests on the north flank of Königstuhl hill, the red sandstone ruins tower majestically over the Neckar valley. From its lofty position, the palace’s silhouette dominates the old town centre of Heidelberg. The rich and eventful history of Heidelberg Palace began when the counts palatine of the Rhine, – later prince electors – established their residence at Heidelberg. First mentioned in 1225, this was destined to become one of the grandest palaces of the Renaissance. 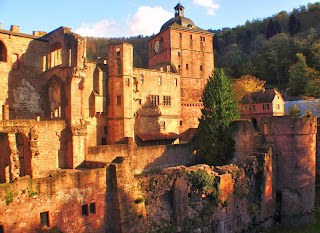 In the late 17th century, the palace was repeatedly attacked and ultimately destroyed by the French in the War of the Grand Alliance. These catastrophic events are commemorated in a spectacular fireworks display, held several times each year. In 1764, after some makeshift repairs, the battered palace was heavily damaged again: this time by the forces of Nature, in the form of two devastating lightning strikes. The once-proud residence caught fire – and was left in ruins. 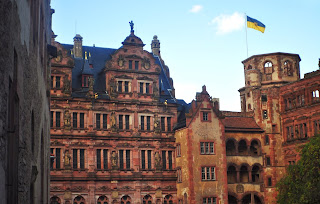 The 19th century brought a new wave of admiration: a sight both terrible and beautiful, the ruins epitomized the spirit of the Romantic movement. Heidelberg Palace was elevated to a national monument. The imposing edifice and its famous garden, the Hortus Palatinus, became shrouded in myth. The garden, the last work commissioned by the prince electors, was never completed. Some remaining landscaped terraces and other vestiges hint at the awe-inspiring scale of this ambitious project. In the 17th century, it was celebrated as the “eighth wonder of the world”. While time has taken its toll, Heidelberg Palace’s fame lives on to this day. 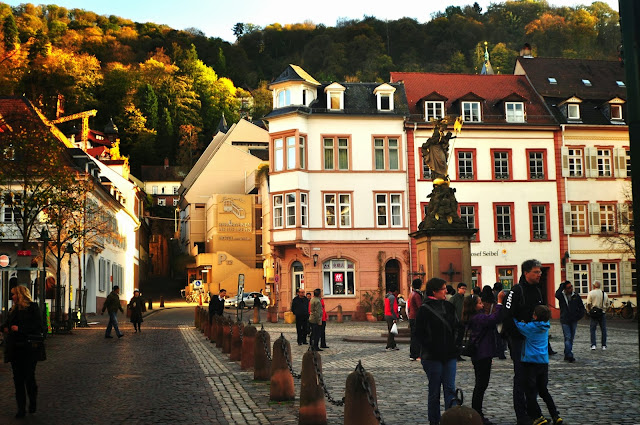 After the castle visit we had free time to wander this fascinating little town and this is always my favorite time when I can get lost in the small narrow cobbled-stoned streets filled with cafes and quaint little shops brimming with every imaginable chocolate treat, pastries, souvenirs and the aromas of coffee pouring out of every nook and cranny. 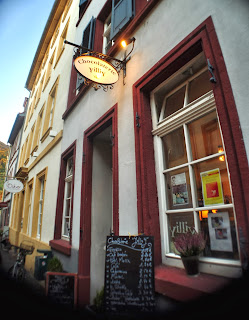 I stopped and bought some souvenirs which I couldn't resist and after walking around taking pictures I stopped at the sweetest chocolaterie cafe and had an amazing cappucinno with an apple streusel..... a thousand calories I am sure but well worth it.

While I was having this mini feast I was happily surprised to see a young man step up to an old piano and play the most wonderful classical music, this was a perfect backdrop to my already great cafe experience. 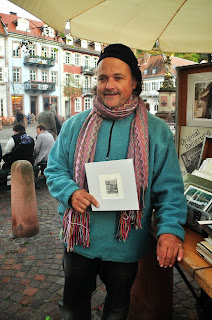 I continued walking around this little town and near the square I found a street artist selling some amazing small paintings, drawings and sketches of the town which he had made himself. I love miniature sketches and the artist was so endeariing. We chatted for some time about the city and he gave me some great stories about the town and life as a street artist.

After looking over dozens of small sketches I finally settled on a favorite one and he was oblidging in letting me take his picture. It was finally time to leave this fairytale town and return to the ship. I left with fond memories and tons of photos so it was a wonderful day!