After a very long night of flying from Montreal to Paris with a three hour layover before I took my flight to Basel, I finally reached the magnificent river ship, SS Antoinette. 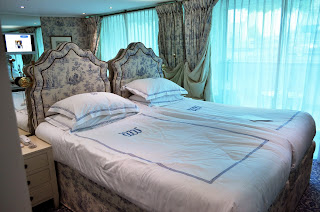 The bed has four choices of pillows, I opted for down filled of course....omg did I sleep well! There is every convenience you could want. Thick imported towels from England, L'Occitaine bath products, plush terry and silk bathrobe and slippers, a safe, a television in the bedroom and another one on the balcony.....this is the life! 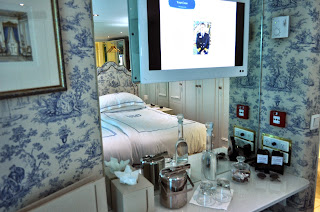 This ship is everything I thought she would be and the cabin is fabulous. The walls are not wallpapered but upholstered padded chintz! The curtains are triple thickness and are so heavy it's like sleeping in a French chateau.

The bathroom is all marble with super thick towels imported from England placed on electric towel warmers (how plush!). The bathroom is also well stocked with a variety of full size containers of L'Occitaine of France products, they are the best in the world.

The shower is glass-enclosed marble,  and has a large rain-shower which has a massage feature.

I was so tired this afternoon that I slept for four hours before dinner, I really needed it.

At dinner I met two gentlemen from Hawaii who have been all over the world, they do four cruises a year, very interesting fellows, we became fast friends and after the dinner we felt like we had been friends forever. That is what I love about river cruising, you meet such wonderful people.


I made it an early night to say the least....slept like a baby.
Posted by Grand Explorer