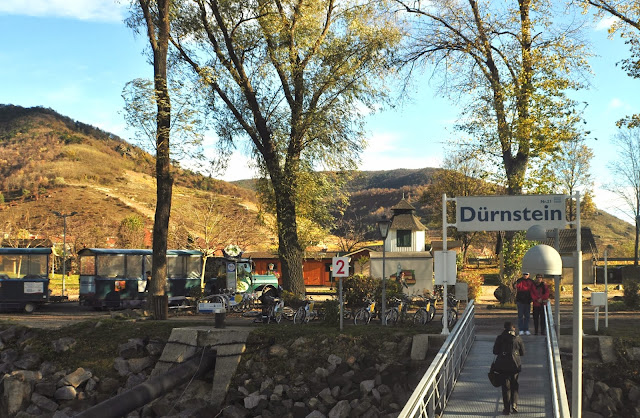 This morning I awoke in the quaint town of Durnstein, Germany. Dürnstein is a small town on the Danube river in the Krems-Land district, in the Austrian state of Lower Austria. It is one of the most visited tourist destinations in the Wachau region and also a well-known wine growing area. Dürnstein was first mentioned in 1192, when, in the castle above the town, King Richard I Lionheart of England was held captive by Duke Leopold V of Austria after their dispute during the Third Crusade. Richard had personally offended Leopold by casting down his standard from the walls at the Battle of Acre, and the duke suspected that King Richard ordered the murder of his cousin Conrad of Montferrat in Jerusalem. 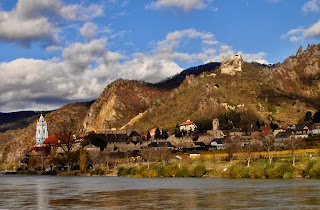 In consequence Pope Celestine III excommunicated Leopold for capturing a fellow crusader. The duke finally gave the custody of Richard to Emperor Henry VI, who imprisoned Richard at Trifels Castle. Dürnstein Castle was almost completely destroyed by the troops of the Swedish Empire under Field Marshal Lennart Torstenson in 1645. Dürnstein Abbey (Stift Dürnstein) was established in 1410 by Canons Regular from Třeboň and from 1710 rebuilt in a Baroque style according to plans by Joseph Munggenast, Jakob Prandtauer and Matthias Steinl. The monastery was dissolved by order of Emperor Joseph II in 1788 and fell to the Herzogenburg Priory. 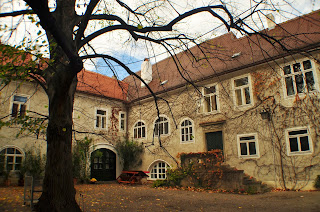 After breakfast we were taken to a private wine tasting at the wine estate Nikolaihof. Nikolaihof is the oldest wine estate in Austria, whose history goes back almost 2000 years to Roman times. In the walls of Nikolaihof can be found remains of the early Christian Agapit basilica in which Bishop Pilgrim of Passau held a synod in 985 A.D. In 1075 the former Freihof was referred to in a document as the central administrative seat of the Passau monastery of St Nikola; the present-day chapel was established by the Augustinian canons of this monastery. Wine has been produced here since the time of the Celts. The first documentary evidence of this dates from around 470 A.D. in the time of St Severin and the Romans. 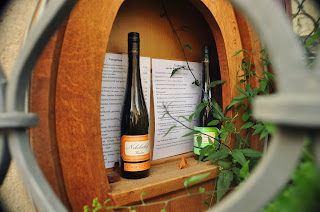 The Saahs family operates in accordance with the regulations of the Demeter Association, one of the strictest control systems of organic agriculture. Its principles may be very roughly summed up as follows: to get as much power and energy as possible into the wine whilst interfering with nature as little as possible. In the Nikolaihof vineyards no herbicides, pesticides, artificial fertilisers nor synthetic sprays are used, but stinging nettle manure, valerian drops, valerian tea and other specially produced preparations, which are applied in highly diluted form like homeopathic medicines, are used.

The whole farm or enterprise must be run along biodynamic guidelines. Regular state inspections ensure that these working principles are properly applied. The biodynamic wine estate is regulated through the Austrian wine code, the Austrian foodstuffs codex and the EU directive ‘Ecological Agriculture'.

The Moon also has its Part to Play :For planting and harvesting times the Saahs family refers to the moon calendar – a sort of tightrope balancing act between sensible measures and the esoteric, as Christine Saahs admits. 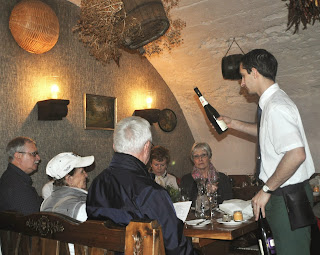 We visited the wine cellars and met the owner who explained the wine process to us, it was very interesting. We then went to their dining room and sampled three varieties of delicious white wine along with some pate and salmon mousse accompanied with fresh home made bread, it was a very nice experience. 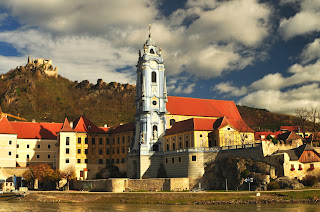 Then it was off to the ship once more since we were were sailing at noon. I had a great lunch onboard and this afternoon was a highlight of the cruise, sailing the Unesco Wachau Valley. The Wachau is an Austrian valley with a picturesque landscape formed by the Danube river. It is one of the most prominent tourist destinations of Lower Austria, located midway between the towns of Melk and Krems that also attracts "connoisseurs and epicureans". It is 25 miles in length and was already settled in prehistoric times. The architectural elegance of its ancient monasteries like Melk Abbey, castles and ruins combined with the urban architecture of its towns and villages, and the cultivation of vines as an important agricultural produce are the dominant features of the valley. The Wachau was inscribed as "Wachau Cultural Landscape" in the UNESCO List of World Heritage Sites in recognition of its architectural and agricultural history, in December 2000.

During lunch it was fantastic to see this landscape sail by, it was one picture-perfect town after the other for many hours as we sailed towards Melk. 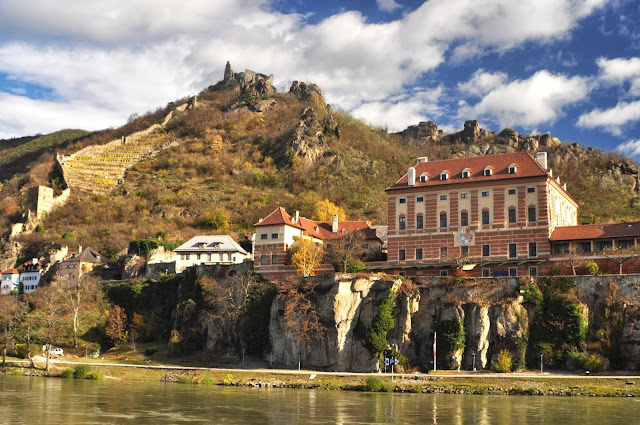 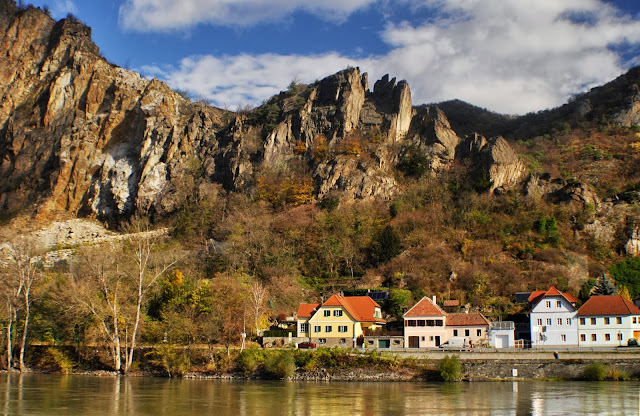 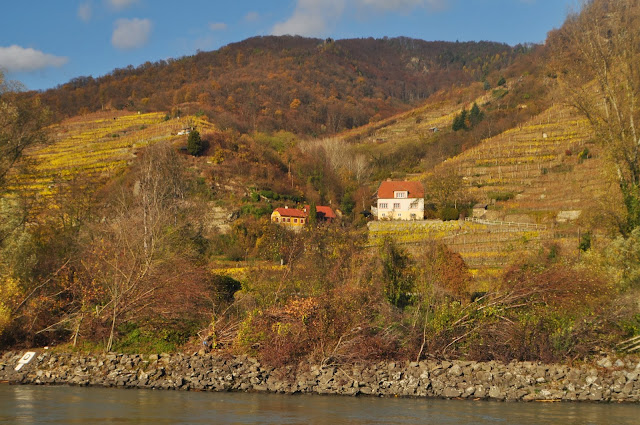 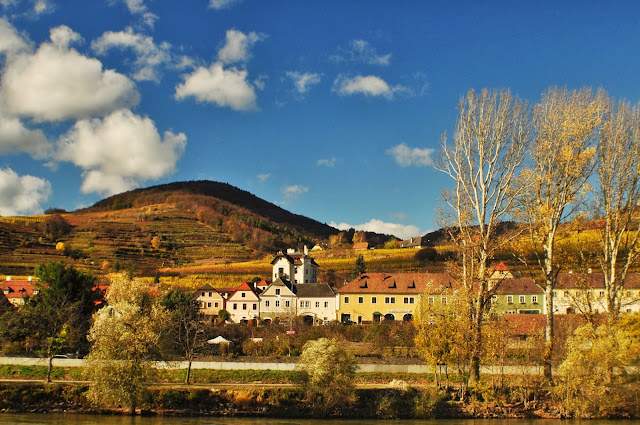 We arrived in Melk at around 3pm and we then left for one of my highlights of the cruise, a visit to Melk Abbey! 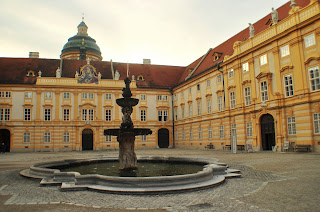 The abbey was founded in 1089 when Leopold II, Margrave of Austria gave one of his castles to Benedictine monks from Lambach Abbey. A monastic school, the Stiftsgymnasium Melk, was founded in the 12th century, and the monastic library soon became renowned for its extensive manuscript collection. The monastery's scriptorium was also a major site for the production of manuscripts. In the 15th century the abbey became the centre of the Melk Reform movement which reinvigorated the monastic life of Austria and Southern Germany. 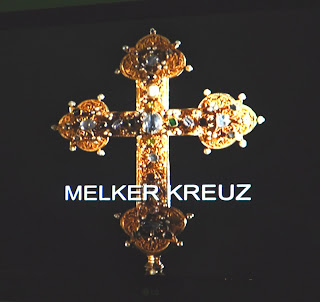 Today's impressive Baroque abbey was built between 1702 and 1736 to designs by Jakob Prandtauer. Particularly noteworthy is the abbey church with frescos by Johann Michael Rottmayr and the impressive library with countless medieval manuscripts, including a famed collection of musical manuscripts and frescos by Paul Troger. The Abbey also has as it's prize possession the Melk Cross which contains part of the wood from the crucifixion cross of Jesus Christ.

Due to its fame and academic stature, Melk managed to escape dissolution under Emperor Joseph II when many other Austrian abbeys were seized and dissolved between 1780 and 1790. The abbey managed to survive other threats to its existence during the Napoleonic Wars, and also in the period following the Nazi Anschluss that took control of Austria in 1938, when the school and a large part of the abbey were confiscated by the state. 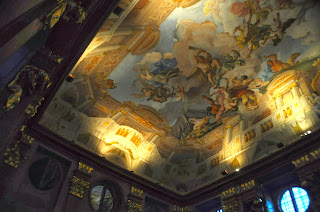 The school was returned to the abbey after the Second World War and now caters for nearly 900 pupils of both sexes. Since 1625 the abbey has been a member of the Austrian Congregation, now within the Benedictine Confederation. In his well-known novel "The Name of the Rose", Umberto Eco named one of the protagonists "Adson von Melk" as a tribute to the abbey and its famous library.

From the outdoor observation deck there is a fabulous view on the town of Melk and since we were there at sunset, it truly was breathtaking. 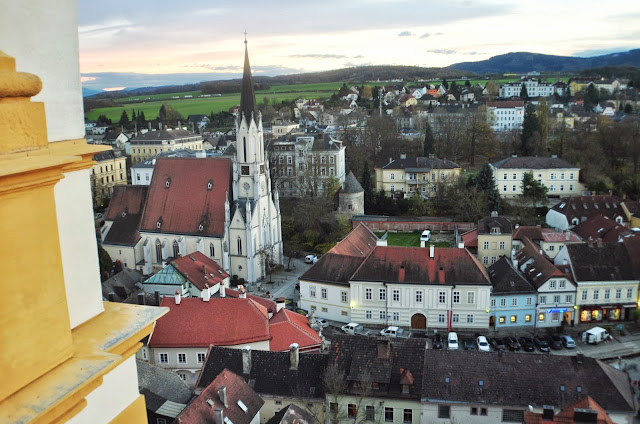 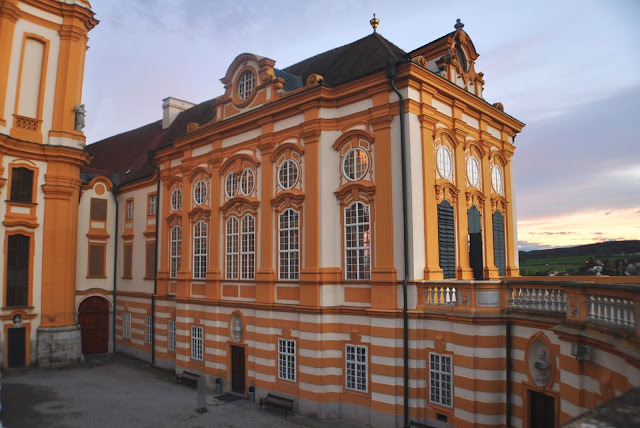 After the Abbey visit we headed back to the ship. Before dinner we had a sketch presentation in the lounge on the life of Franz Joseph and Sisi. There were two actors dressed in period costumes who described the life of these two historical figures. It was done with humor and was a lot of fun to watch.

Tonight we had an Epicurian dinner with the best Austrian recipes from the region accompanied with the finest of wines. After this gastronomical event I retired early to my comfy cabin, I watched a movie and enjoyed a late night hot chocolate before falling asleep.