When I awoke this morning I was pleased to see it was a mild sunny day. After an early breakfast I set off to join the tour that would take me into downtown Vienna. Since I had been to Vienna before I advised the tour guide that I would leave the tour once in the center of town since I had reservations at the Spanish Riding School to see the world famous Lipizzan stallions on their morning exercises. The last time I was here I did not have the time to see them and I promised myself this treat once I came back and now the day had come. 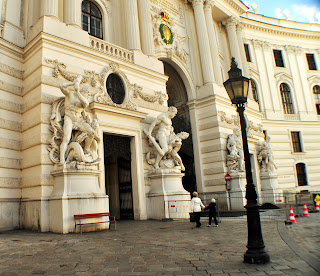 The maneuvers and jumps associated with high classical dressage were originally designed as equine military training to develop strength, agility, balance, concentration and focus on the rider’s demands. Over time, they have been transformed into a living art form of balletic grace and precision, celebrating the accomplishments of some of the most remarkable horses on the planet. The principles of dressage were created by Greek historian and military leader Xenophon in 400 B.C.E. and are most famously represented today in the Spanish Riding School in Vienna. For Xenophon, the rider’s connection with the horse is key: “If the rider is not in harmony with the nature of the animal, then it will perform as a burden with no display of pleasure.” To master this equestrian art form, both rider and horse must work together for years at Vienna’s Spanish Riding School perfecting the movements.

When they are approx. 4 years old, the Lipizzaner stallions leave their birthplace Piber and travel to Vienna to the Spanish Riding School where they are subsequently trained according to the principles of classical horsemanship. The first priority of a Lipizzaner’s training is in no way different to that of any other horse and can be summed up as the pursuit of obedience, suppleness, responsiveness and ease. Lipizzaners are not only frugal, strong and particularly well suited for the art of classical horsemanship; they are intelligent and have an exceedingly good memory. These are all qualities that the trainer should know and make use of in his work with the horse. 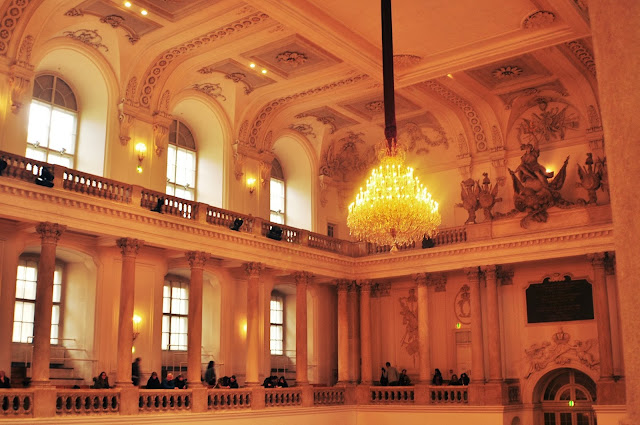 The first year deals with the elementary field schooling of the "Remonte“, the young horse. The horse is ridden as much as possible in a natural posture in uncollected gaits on straight lines. 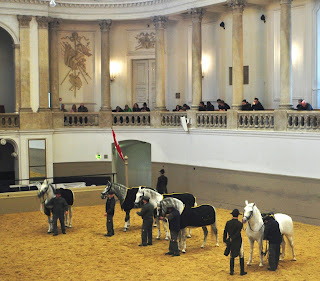 The following year comprises what is called the secondary field schooling, the Campagne School. The collected horse is ridden in all gaits, turns and circles in complete balance.

The "Haute École“ (High School): here the rider brings his horse to perfection. Everything now depends on the individual skill, talent, strength and sensitivity of each stallion and what he offers. In total collection the stallion learns the piaffe, the passage, pirouettes and to change legs in the canter. It takes approx. 6 years for a stallion to be ready to take part in the School Quadrille and having accomplished this he has completed his schooling. Only very few, particularly talented and sensitive stallions master the art of the “Schools above the Ground” (levade, courbette, capriole).

They are magnificent animals and it was a joy to see them in action. Here is a short video which shows how beautiful they are.

After the show I had some free time for shopping and then met up again with the tour who were getting ready to return to the ship for lunch. The city is so lovely with horse-drawn carriages dotting the streets of baroque architecture. 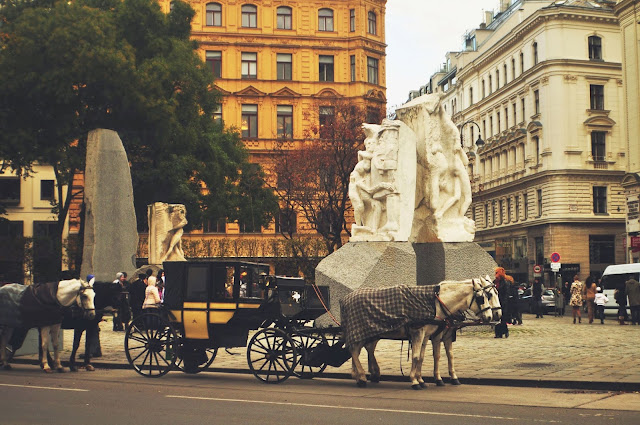 After lunch we had a tour scheduled of Schonbrunn Palace.

At the end of the 17th century Emperor Leopold I commissioned the gifted Baroque architect Bernhard Fischer von Erlach to built a palatial hunting lodge for the heir to the throne. On the site of the old imperial château de plaisance a splendid edifice was to arise. 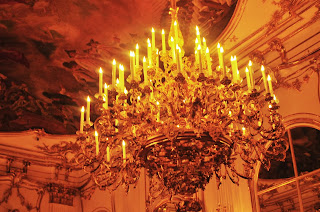 Half a century later under Maria Theresa, Schönbrunn Palace was to become the magnificent focus of court life. From that time onwards it played host to the leading statesmen of Europe. Although Austria is now a republic, Schönbrunn has remained a place of political encounter at the highest level. The magnificent architecture and the exquisite décor of its state rooms marks Schönbrunn out as a cultural treasure and tourist attraction of the first order. 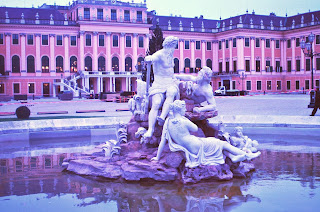 Schönbrunn Palace is part of the World Cultural Heritage and Austria's most visited sight. This Baroque synthesis of different arts, consisting of a palace and gardens, has been in the possession of the Habsburgs for centuries, and is today largely in its original historical condition. Visitors find numerous attractions, from a tour through the authentically furnished residential and representational rooms of the Imperial family in the Palace, through the maze and the labyrinth in the garden to a separate children's museum.

Emperor Franz Joseph, who later married the enchanting Sisi and reigned from 1848 to 1916, was born here in 1830. The monarch spent his last years entirely in the palace, which became the property of the new Republic of Austria only two years after his death. Today, the palace is part of UNESCO’s cultural heritage due to its historic importance, its unique grounds and its splendid furnishings.

The rooms are mostly decorated in Rococo style. Most of the walls and ceilings are covered with white-lacquered surfaces with ornamentation covered with gold leaf. Bohemian crystal chandeliers and white porcelain tile stoves are also part of the harmonious design. The living quarters and offices used by Emperor Francis Joseph are simple and very unpretentious; by contrast, the state rooms and guestrooms are much more lavish. 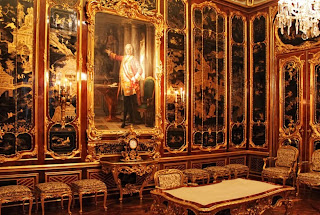 In 1772, six-year-old child prodigy Wolfgang Amadeus Mozart gave a concert in the Hall of Mirrors. In the Round Chinese Room, Maria Theresa held secret conferences with her Chancellor, Prince Kaunitz. Napoleon met with his generals in the Vieux Laque Room. In the Blue Chinese Salon, Emperor Charles I signed his abdication of the crown in 1918, marking the end of 640 years of Habsburg dominion in Austria and the demise of the monarchy.

The Room of Millions, paneled with rosewood and decorated from floor to ceiling with priceless Indian and Persian miniatures, is probably the most magnificent Rococo room anywhere in the world. The Congress of Vienna danced in the Grand Gallery in 1814-15; today, the Austrian government gives state receptions there when important heads of state come to Austria for official visits.

After the palace tour we headed back to the ship to relax prior to dinner. They usually have a port talk in the lounge for the upcoming day however I headed for my cabin to take a nice shower massage before getting ready for dinner.