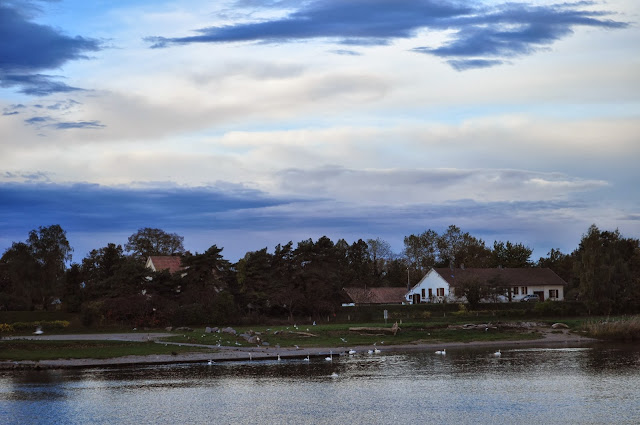 Today I had an early morning start. When I woke up we were docked in Breisach, Germany. When I pulled the draps away to my surprise and amazement I found  a welcoming party of gorgeous swans swimming past my balcony!  OMG they were so beautiful, there were dozens of them along the river, what a nice start to the day.

After a hearty breakfast of scrambled eggs, bacon and blueberry pancakes off I went to join the tour. 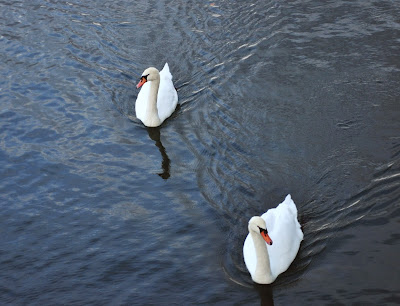 Situated along the Rhine River on the French and German border lies the city of Breisach. Home to Europe's largest producing wine cellar and the beautiful late Gothic cathedral, St. Stephansmünster. 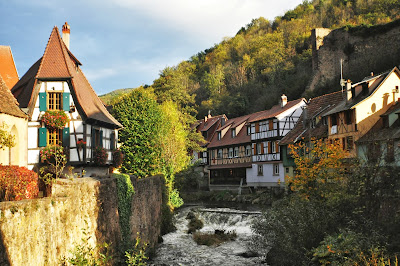 We drove from Breisach onto what they call the wine route because of all the vinyards in this area.

Our first stop was Kayserberg...what a quaint medieval town this is! It's in Alsace, France where they produce some of the best wines in the world.This is also the birthplace of Albert Schweitzer. Everywhere you look there are half-timbered houses with window boxes brimming with flowers and as you walk around taking in all the visual sights you are engulfed with the tempting smells of home made pastries and fresh brewed coffee, hard to resist. The narrow cobble-stoned streets are dotted with small shops of all kinds and there are dozens of enticing cafes along the route.

After spending some time here we continued our journey to Riquewihr, France. Once again we are thrilled to find a small town which time has forgotten. The shop signs are fabulous here with wrought iron depictions of the kind of shop it is, so charming.

Situated between the peaks of the Vosges mountains and the Plain of Alsace, Riquewihr is a medieval town right in the heart of the Alsatian vineyards, classified among the most beautiful villages in all of France. Alsace historically was part of the Holy Roman Empire and the German realm of culture. Since the 17th century, the region has passed between German and French control numerous times, resulting in a cultural blend. Germanic traits remain in the more traditional, rural parts of the culture, such as the cuisine and architecture, whereas modern institutions are totally dominated by French culture. 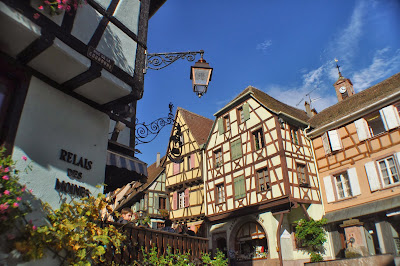 I had resisted any edible temptation for the longest time but when I stumbled upon a shop making fresh macaroons in all flavours, I caved and walked into this marvelous small enclave and bought a bag of chocolate and vanilla macaroons.....OMG heaven!!!

Alsatian cuisine, somehow based on Germanic culinary traditions, is marked by the use of pork in various forms. Traditional dishes include baeckeoffe, flammekueche, choucroute, and fleischnacka. Southern Alsace, also called the Sundgau, is characterized by carpe frite (that also exists in Yidish tradition). The stork is a main feature of Alsace and was the subject of many legends told to children. The bird practically disappeared around 1970, but re-population efforts are continuing. They are mostly found on roofs of houses, churches and other public buildings in Alsace. You can buy many items with storks on them here, of course I picked up a cute small fuzzy replica for myself to bring home.

In my free time I stopped and enjoyed a glass of the famous Alsace wine with some shipmates and then we headed back to Breisach to reboard the Antoinette. Tonight was the Captain's Welcome Aboard cocktail party and gala dinner where the Champagne flowed and the filet mignon was delectable. A good night's sleep was a well deserved event...yawwnnnn.