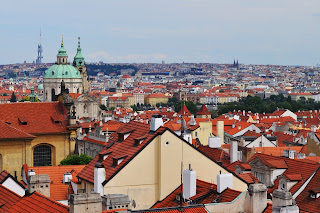 Today was my last full day in Prague. There was one more area that I had to explore and that was Prague Castle atop Petrin Hill. This was quite a walk uphill all the way. It didn't help that it was 80 degrees in the shade but hey I was in Prague on my way to see it's most famous structure so no complaining. I had to keep walking up and up and at one point I had to sit because this was quite a hike. When I finally reach the pinacle I was well rewarded with the most incredible sight, the entire city of Prague lay before me. Another five minutes and I was at the entrance to this huge monolithic medieval castle and it was breathtaking to say the least. 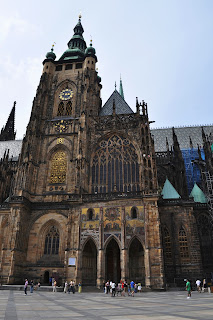 The Prague Castle, an ancient symbol of the Czech lands, is the most significant Czech monument and one of the most important cultural institutions in the Czech Republic. According to the Guinness Book of World Records, the Prague Castle is the largest coherent castle complex in the world, with an area of almost 70,000 m². A UNESCO World Heritage site, it consists of a large-scale composition of palaces and ecclesiastical buildings of various architectural styles, from Roman-style buildings from the 10th century through Gothic modifications in the 14th century.


The Prague Castle complex comprises three courtyards and a great many buildings, including Saint Vitus Cathedral (the most recognisable landmark in the city), several palaces, viewing towers, museums and art galleries, cafés, a monastery and Golden Lane. 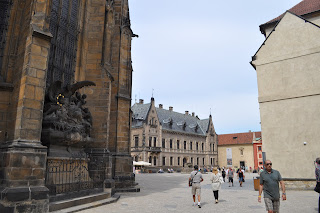 There were guards at the entrance and after watching the changing of the guard ceremony I entered the grounds to start exploring Prague's main attraction. There are many buildings and the height of the cathedral is so imposing. The first known building on the site of Prague Castle was erected in the 9th century. In the 12th century it was replaced by a Romanesque palace. In the 14th century it was rebuilt in the Gothic style, under the reign of Charles IV. After World War I, renovations to the castle buildings and to the Prague Castle Gardens were undertaken by the architect J. Plecnik. Today, Prague Castle is the seat of the President of the Czech Republic and serves as the historical and political centre for both city and state. 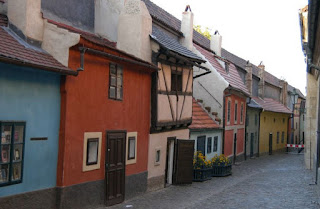 In the castle complex there is a street called the Golden Lane. The street is full of small houses built in Mannerism style at the end of the 16th century. In 1597 the emperor Rudolf II decided to give the space there to the castle marksmen who guarded the fortification. But there were 24 marksmen and a lack of space. Therefore, the marksmen had to build very small houses for them and their families. The material they used was stone, mud, and wood. The emperor prohibited to build windows in the direction to the Deer Moat or to sell or rent the house to somebody else. During the decades several houses were destroyed, after 1657 there were only 14 houses left. Castle marksmen were not needed so much any more, that’s why more and more people of other occupations came to live there. The Golden Gate hosted both rich and poor people, artists, clerks, footmen, etc. One of the famous inhabitants of this street was famous writer Franz Kafka in house no. 22 or Prague prophetess Madame de Thebes, who was killed by the Gestapo in the war because she foretold the end of Nazism.


Golden Lane got its name from the story of alchymists living in the street during the reign of Rudolf II who tried to make not only the philosopher stone or the elixir of youth, but also to transform metals into gold. Even though these stories are not based on the truth, there is a real story dating to the beginning of the 20th century. One of the local house was inhabited by an old man, doctor of philosofy Uhle, who spent all his money on old books about magic. He made secret experiments in his lab inside the house. In 1831 people in the Golden Lane heard a big detonation from his house. When fire fighters entered the house and distinguished fire, they found Uhle dead with a yellow stone in his hand. Later on the stone was proved to be gold. How the gold got into the house is still not known. Maybe he really made his and many other alchymists’ longtime dream come true. 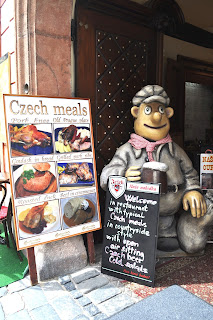 Later I started to make my way down the hill again stopping into some small shops along the way. Each street has a bevy of interesting stores and fun restuarants. I just had to grab a bite in one of the cute restaurants along the way.

Who can resist a real Czech meal? I loved the food here because it reminded me of the kind of French Canadian food I was raised on. Hearty meats with potatoes and stews with gravy, chops and decadent desserts. Meals are filling and so tasty.
After more sightseeing I then had to make my way back to the hotel to get ready for my special evening. This was another night I had been waiting for since I got here. Tonight was the Mozart performance at the Estates Theatre. 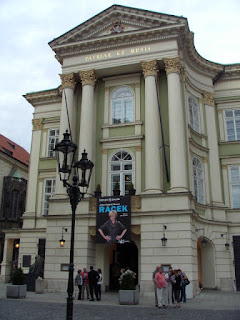 The Estates Theatre dates back to 1783. It is regarded as one of the most beautiful, historic theatres in Europe, and the name Wolfgang Amadeus Mozart will be forever linked with it. It was here in 1787 that he personally conducted his premiere of Don Giovanni. Don Giovanni, The Magic Flute, Cosi fan Tutte, The Marriage of Figaro and other famous Mozart operas feature heavily in the repertoire of the Estates Theatre. Ballets include Tchaikovsky's classical ballet Onegin.

In the course of its history the Theatre of the Estates attracted some significant artists of European stature: Carl Maria von Weber was a conductor here, Angelica Catalani sang here, Nicolo Paganini gave concerts, there were also conductors Rubinstein, Carl Goldmark, and Gustav Mahler. 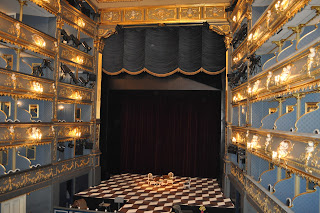 The theatre was the one used in the movie "Amadeus" which is one of my favorite movies of all time, so I was very excited to step foot in this legendary theatre. I had reserved a box and as I entered and took my seat it was overwhelming to think that the genius of Amadeus had once conducted inside this building where I was sitting just as the high society elite and royalty had sat hundreds of years ago. Nothing has been changed since those times. I ran my fingers along the brocade on the walls and stared at the ornate ceiling and cherubs which adorned the lights, golden gilt was everywhere. 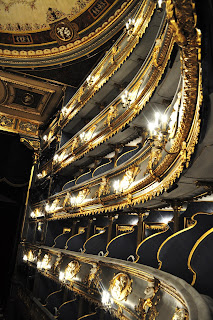 A quartet came out and as they started to perform it struck me how very special an evening of entertainment was hundreds of years ago. No buttons to push, no remotes to control, people just had to use their senses to see and hear remarkable artistry for entertainment. 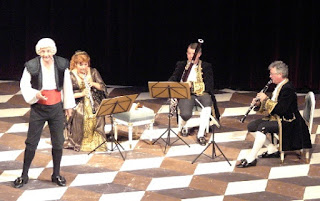 They were also joined by two opera singers who sang some very recognizable pieces and as I sat in the dark listening, I thought this was such a fitting event for my last night in Prague, a celebration of the best of Mozart to end what had been a most unforgettable voyage.

We were not allowed to film or take pictures but I was not to be detracted. I did take some shots and a short video....couldn't help it.

Later that night I went out to take pictures of Prague by night when it truly becomes a fantasy town with it's lamp-posts giving a golden glow to the city. Here are some of my favorite photos...... 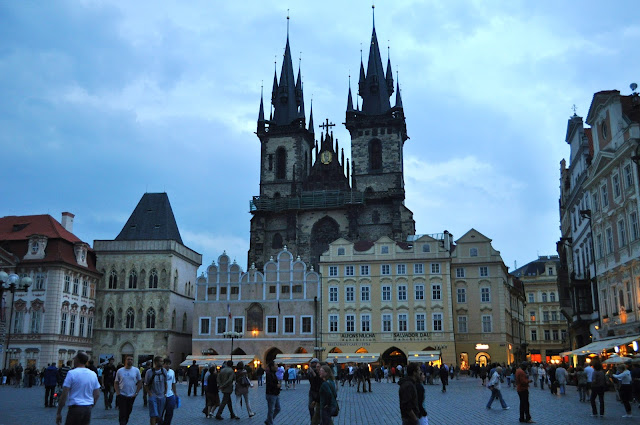 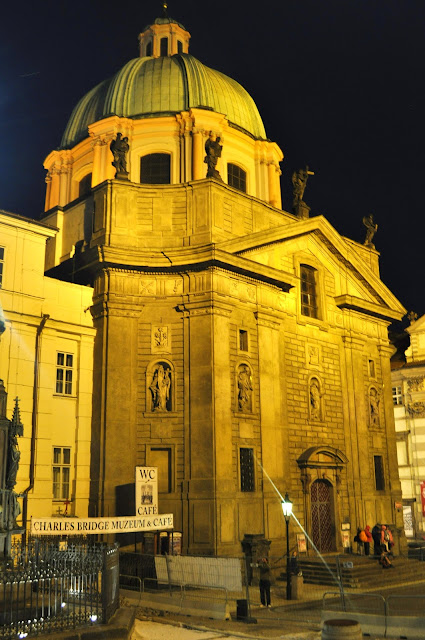 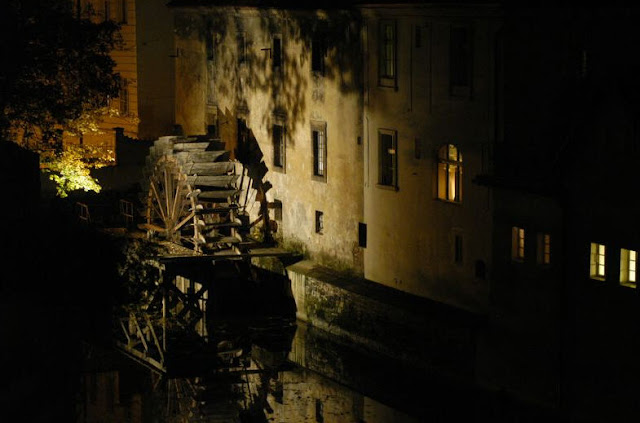 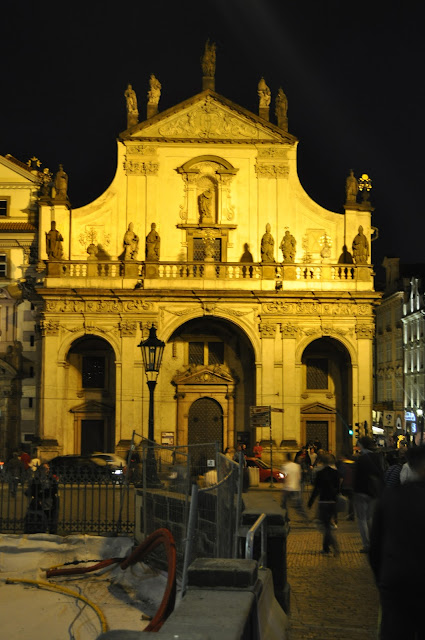 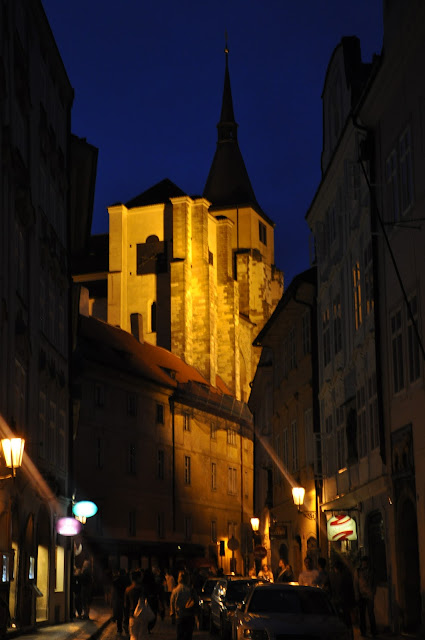 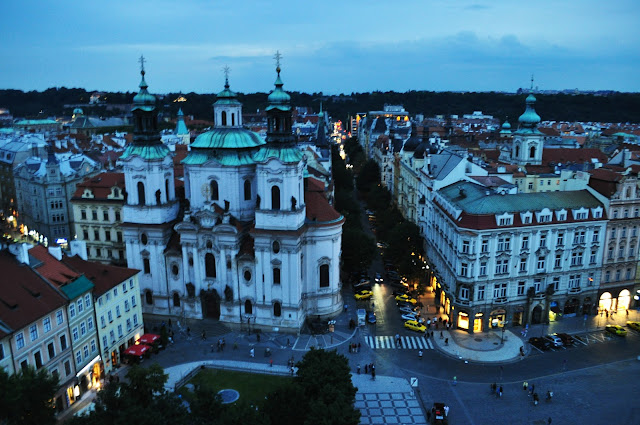 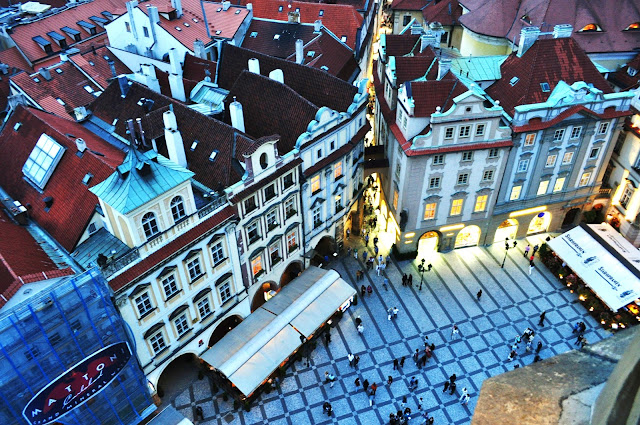 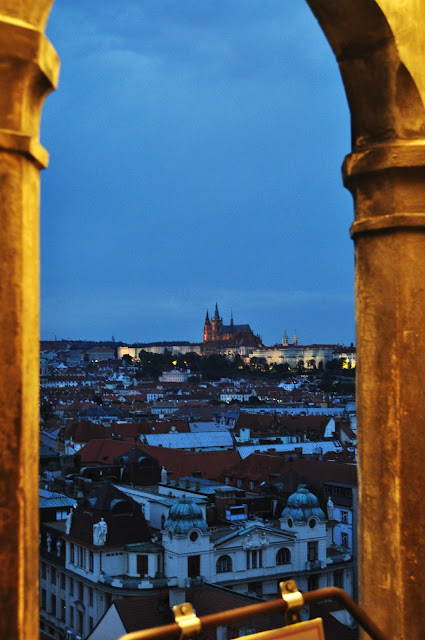 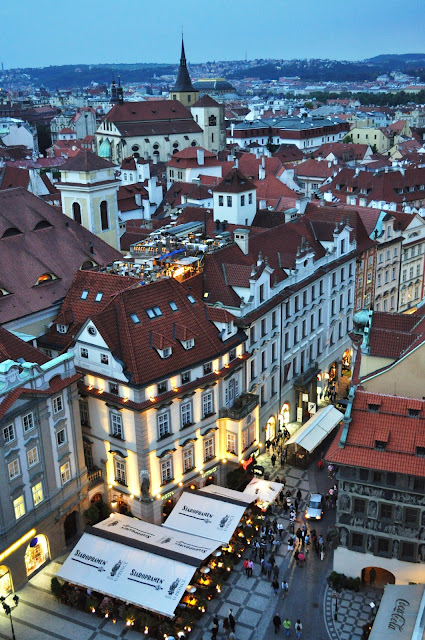 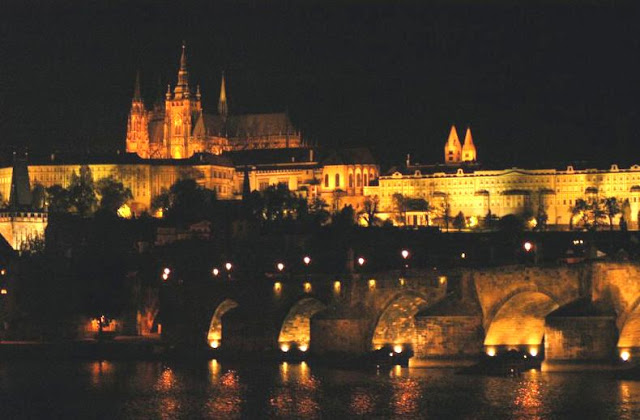