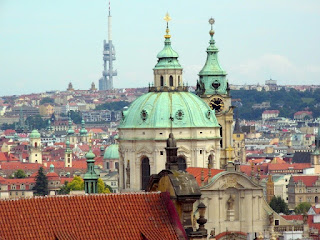 This morning I was a bit lazy since I was so comfy in my bed and slept in until 10:30. The hotel has a cappuccino machine in the room so I made myself a cup while I relaxed pouring over my Prague guidebook deciding where I would go today. Prague is very compact so it is easy to walk to all the main sights without hassle. I am a photography enthusiast so I was looking forward to making this my photo expedition. Everywhere you turn in Prague is another fabulous shot. The architecture is amazing and looking up at Prague Castle which overlooks the city from high above the hill is quite breathtaking. The combination of old brightly colored buildings with ornate ornamentation along the river with the Charles Bridge in the background is quite irresistible. 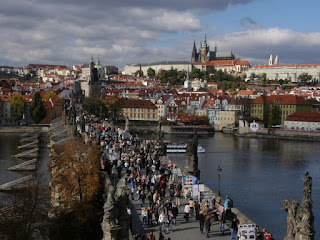 It was a gorgeous day today and I started out by heading towards the Charles Bridge to look more closely at the statutes and take pictures of these beautiful artifacts which have been standing there for hundreds of years. Charles Bridge is a stone Gothic bridge that connects the Old Town and Malá Strana. Its construction was commissioned by Czech king and Holy Roman Emperor Charles IV and began in 1357. In charge of the construction was architect Petr Parléř whose other works include the  St.  Vitus Cathedral  at the Prague Castle. It is said that egg yolks were mixed into the mortar to strengthen the construction of the bridge. Charles Bridge has survived many floods, most recently in August 2002 when the country experienced the worst flood in the past 500 years - so the egg yolks must not have been such a bad idea. 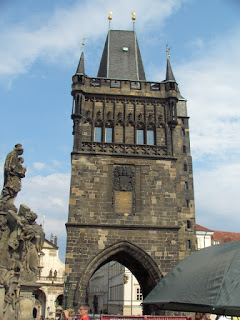 There is a tower standing on each end of the bridge. Both the Staroměstská věž on the Old Town end and the Malostranská věž on the Malá Strana end can be climbed for a view of Prague and the bridge from above. Baroque statues (a total of 30) began to be placed on either side of Charles Bridge in the 17th century. The most popular statue is probably the one of St. John of Nepomuk, a Czech martyr saint who was executed during the reign of Wenceslas IV by being thrown into the Vltava from the bridge. The plaque on the statue has been polished to a shine by countless people having touched it over the centuries. Touching the statue is supposed to bring good luck and ensure your return to Prague. Just like everyone else I did touch it so now I can look forward to returning to this enchanting city. 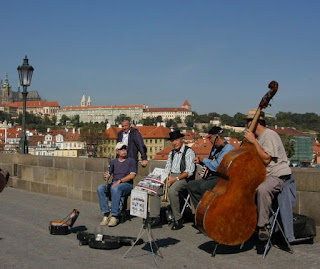 There are many artists, musicians and souvenir vendors on the bridge and contrary to other cities where the artists sell items made in China, here you can see them making the items and they sign them. I bought a beautiful small watercolor of Prague Castle which makes for a great souvenir and I only paid $10. that was a great buy! 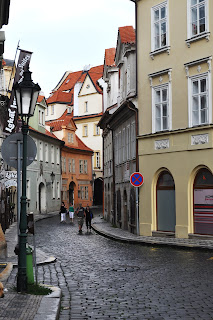 Once across the bridge I made my way through the winding narrow cobbledstoned streets towards the main square, Old Town Square. The Old Town Square is the oldest and most important square of the historical Prague. It is surrounded with historical buildings such as the Old Town City Hall with the famous Astronomical Clock, the imposing St. Nicholas Church and Church of Our Lady before Tyn, and many houses and palaces of various architectural styles and colourful history. It has been a centre of Prague Old Town since the middle ages, when it was a market place at the crossing of European merchants´ roads.

One of the turning-points of Czech history, the execution of 27 leaders of the rebellion against Emperor Matthias, took place there in 1621. You can see 27 crosses in the pavement by the Old Town City Hall, as well as symbols of swords and a thorn crown, commemorating the sad event.

A legend says, that the ghosts of the executed noblemen return to the square every year on 21 st of June, the day of the execution. 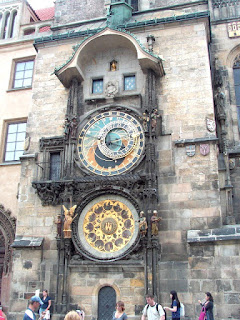 The medieval astronomical clock adorns the southern wall of the Old Town City Hall in the Old Town Square. It announces every hour with 12 apostles passing by the window above the astronomical dial and with symbolic sculptures moving aside. That makes it a popular tourist attraction and hundreds of tourists flock the area a few minutes before every hour. The event is also announced by the blowing of horns prior to the start of every hour. 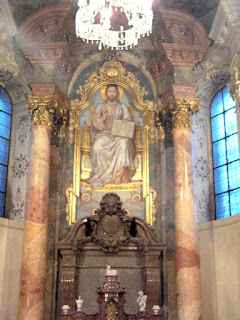 Once I watched the clock I walked over to where many people were gathered around St. Nicholas church. St. Nicholas is a Baroque church, decorated with sculptures by Antonín Braun. The interior design was inspired by the chapel of St. Louis-des-invalides in Paris. In 1781 decoration inside St. Nicholas was removed after emperor Josef II ordered the closure of all monasteries without a social function. From 1870-1914 St. Nicholas became Russian Orthodox. Then, during the second World War, Czech army units were stationed here and artists were set to work restoring the church. After the war, St. Nicholas was handed over to the Czech Hussite movement, with whom it remains today. It now serves as both a church and a magnificent venue for classical concerts. 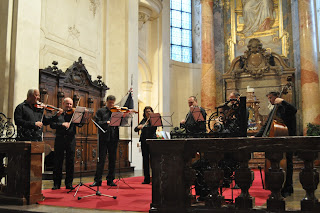 Luckily they had a concert starting in 10 minutes and I had just enough time to buy a ticket. When I walked in I was astonished to see such a beautifully ornate interior. There were 50 foot high marble columns and frescos dating back hundred of years. The ceiling was covered in fabulous painted scenes and the sun was shining through the stained-glass windows and made the crystal chandeliers look like they were covered in diamonds. The concert was really great with beautiful music from all the masters especially Mozart and there was also opera pieces sang as well which was a bonus. This was a nice unplanned treat. 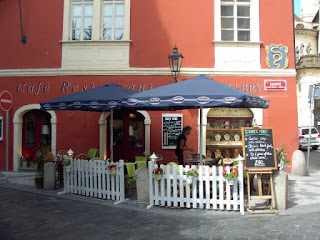 Once it was over I was beginning to get hungry and I found a very cute little sidewalk cafe that was offering a soup, steak with roasted potatoes and strudel for dessert daily special so I was sold. It was so nice to sit there and watch tourists and locals intermingle as they went on their way. Because the town is so compact with people walking everywhere as opposed to using cars, I found that people in Prague tend to be friendlier and readily speak to each other.


Strangers become temporary friends in a town filled with eager travellers all having a story to tell while admiring the beauty that is Prague. At the table next to mine there were four young men from Australia. They were eyeing all the girls strolling by and were having fun and laughing while drinking their beers. I could not help but overhear that they were college students on a school break. These sights and sounds are everywhere in Prague.

Now it was starting to get dark out and I thought it might be tme to head back to my hotel. I did manage to browse a few shops along the way and I bought a sweet small puppet. Prague is known for making exquisite puppets that can run into the thousands of dollars. Mine was a bit more modest at $15. but it's a hand-made lil treasure just the same.