09 June 2011 - Today after breakfast it was time to leave the ship which was a sad moment for sure after two great weeks of fascinating sights and decadent dining. But we still had two days in Bucharest and one of the hightlights of my trip was coming up....Transylvania and following in the steps of Dracula!


We bid farewell to the River Countess and were off for a city tour of magnificent Bucharest. I could see why they call this city the "Paris of the East". Grand boulevards dotted with stately homes abound everywhere and it was surprising to see such a vibrant and interesting city filled with a variety of architecture and colorful people. 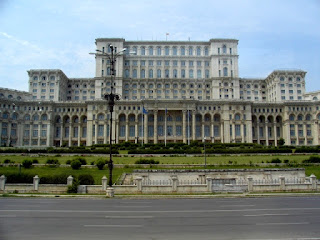 We first visited the the Palace of Parliament. Due to its immense physical, psychic and historic stature, it is perhaps the most controversial building in Romania. Meant to be the crowning achievement of 'Centrul Civic' or 'Civic Centre' - Communist leader Nicolae Ceausescu's ambitious urban development plan - the Palace of Parliament represents one of the most extravagant and expensive building projects in the history of mankind; certainly of the last century. Claiming superlative as the world's second-largest building by surface area after the US Pentagon, the Palace of Parliament is one of Romania's biggest tourist attractions, despite popular disdain.


Estimates of the materials used include 1 million cubic metres of Transylvanian marble, 3,500 metric tonnes of crystal for the 480 chandeliers and 1,409 lights and mirrors that were manufactured, 700,000 tonnes of steel and bronze, 900,000 cubic metres of wood and 200,000 square metres of woven carpets, many of which were spun on site.

Though no figures have been officially released, it is said that some 20,000 workers toiled in 24-hour shifts, seven days a week, to build the Palace at the pace at which it was being constructed. To finance the project, Ceausescu had to take on enormous foreign debts. In order to repay these debts he systematically starved the Romanian people, exporting all of the country's agricultural and industrial production as the standard of living in Romania sank to an all time low. Food-rationing, gas electric and heating blackouts became everyday norms; people lived in squalor and poverty as the Ceausescu's themselves exhibited outrageous extravagance.

The Romanian Revolution of 1989 broke out just as the People's Palace was nearing completion. Mass protests in December 1989 in Timisoara caused martial law to be declared, a Bucharest rally turned to riot and the Ceausescus were forced to flee the capital by helicopter. They were soon after captured by police in Targoviste after abandoning their chopper, were sentenced to death by an ad hoc military court on charges ranging from illegal gathering of wealth to genocide and were executed by firing squad on Christmas Day, 1989. 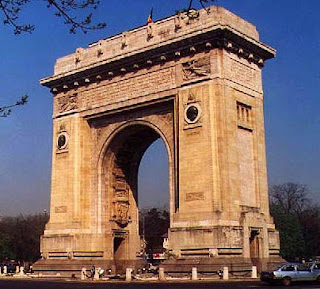 Next we were off to see Revolution Square, site of the National Art Museum and Athenaeum concert hall. There is even an Arch de Triompe on the impressive Soseaua Kisseleff which is longer than the Champs Elysees.

There are many boulevards lined with smart shops and flowers line the streets. We took in several hours of visiting this expansive city and after our tour in very hot weather we were taken to our hotel for the next two nights, the Radisson Blu.

After weeks of gourmet food and sightseeing when I was finally in my room all I wanted was a nice long bath followed by a room service club sandwich. It was great to eat regular food for a change  while I lazed around in my nightie, perfectly content with a quiet night watching a movie.  It had been a tiring day and I went to bed not to late since in the morning I was about to undertake the sightseeing I had most anticipated since leaving home.......Transylvania!


Posted by Grand Explorer No comments: