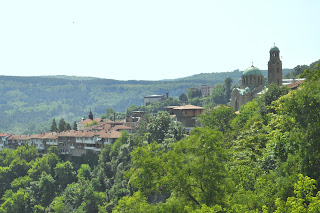 08 June 2011 - We were docked in Rousse today again and we had a full day planned. After a drive through the Bugarian countryside we visited Veliko Turnovo which is built on three hills with the Yantra River winding through it. This is an unusual city whose stone houses seem perched one above the other on the steep bank of the Yatra river. We were taken to see Tsarevets - the place of the patriarchal church and royal palaces, the hill where Baudouin's Tower still rises, linked with the legend of the Latin Emperor Baudouin of Flanders who was captured by the Bulgarian king Kaloyan. We visited the entrance to the old fortress and saw the ruins of the Tzarevetz Castle

We also saw Trapezitsa - where the foundations of 17 medieval churches were discovered. It was a marvel to see the Bulgarian National Revival period architectural ensembles on Gurko Street, the old Nikoli Inn and the St. St. Constantine and Helena Church. The original Samovodene Market has been brought back to life and, as in olden times, skillful craftsmen fashion and sell exquisite objects in the small restored workshops. It was incredible to go from one shop to the next filled with local handmade treasures which you can buy for very little money. 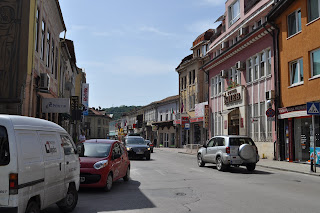 There was a coppersmith making beautiful copper hammered pots that hung outside his shop gleaming in the sun next to window boxes filled with flowers, quite a quaint and beautiful sight.

Next I found a great bead shop where a lady was working away at making fabulous jewelry from the hand made beads she makes. It took forever to decide which to take home as they are all one of a kind individually made. I left with about 20 beads and only parted with a few dollars. It was a great time going from one shop to another viewing all the different crafts. The fun part is that you could buy items as souvenirs which are true items made in Bulgaria instead of having "Made in  China" stamped underneath, which makes each gift you take home that much more special. 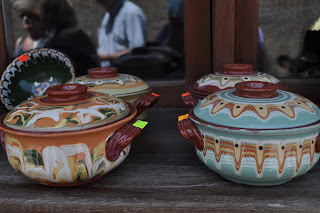 One specialty which I fell in love with was the incredible hand made pottery you could find in some many shops. There was an infinite variety of pottery vases, cups, plates and cookware in so many colors, it was impossible to choose. Bulgaria is also famous for roses from which they produce Rose Oil which is exported worldwide. Many other products are made using the famous roses such as rose wine and rose liqueur (which is delicious!) as well as rose  body and bath products. One fun gift to bring home is a small wooden doll which contains a cylinder of rose perfume, really fun. 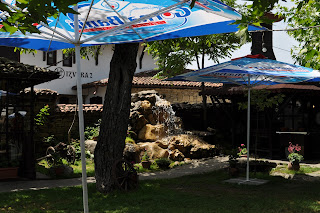 After our free time for shopping we went and had lunch at a very picturesque restaurant where we had quite a tasty meal comprising of a wonderful goulash served in locally made pottery. The restaurant was quite large with beautiful grounds with fountains and a swimming pool, an outdoor Bar-B-Que made of stone as well as an area with caged peacocks which made for a really fun lunch stop. During the meal we saw a show with dancers dressed in traditional costumes and local musicians. It was so hot and humid that we were extremely happy to see the frosty bottles of beer, soda and water show up at our tables!

After lunch we were off to the village of Arbanassi which was founded in the late 15th centry by Christians coming from the south-western parts of the Balkan peninsula. It is situated 3km to the northeast of Veliko Turnovo, perching on a high plateau overseeing the Trapezitsa and Tsarevets hills. The settlement saw its bloom in the 17-18th c. when it grew into a wealthy crafts and trade hub. It was during that period that most of its gorgeous houses were erected. The oldest houses of Arbanasi are made entirely of stone and resemble tiny models of fortresses that cannot be seen anywhere else in Bulgaria. 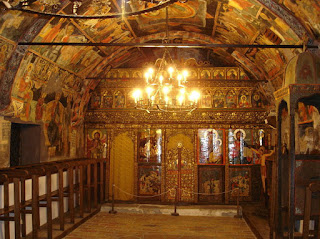 Today Arbanassi is an architectural and museum reserve. It is a picturesque open-air museum of cultural heritage, which includes 80 houses as well as 5 churches, one special one being  "Rozhdestvo Hristovo" (The Church of the Nativity Of Christ) with more than 3,600 frescoes.

From the outside this building looks like a barn but inside is quite a different story. There are no windows but each inch of wall and ceiling space has been painted with extremely well preserved frescoes and the rooms are quite awe-inspiring. 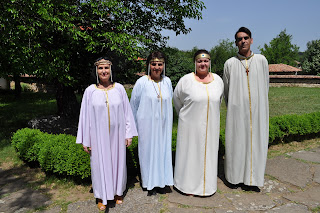 We got an added treat in our visit to this unique church. We were treated to a performance of some chant and operatic singing from a local ensemble of three ladies and a cleric who were very good indeed. It was quite a spiritual experience to hear chanting in this setting filled with so many incredible frescos. We sat on pews that were aligned against the walls in single file and the whole experience was amazing.

After this full day many of us dozed off on the trip back to the ship. It was so refreshing to get into a nice cool comfy motorcoach after the sweltering heat of the day! We arrived back at the ship late afternoon. I was happy to find on my bed an envelope with an invitation from the captain to join him at a private cocktail party followed by dinner at his table with 6 other chosen guests. I was looking forward to this and anxiously got ready for this evening as it was the Gala Captain's Farewell Dinner.

The private cocktail party with the captain was very special and it was so much fun to sip champagne and talk to the captain about his experiences at sea. After about 45 minutes we made our way to the dining room. I was very honored that the captain extended his arm to me to personally escort me to his table. I felt very proud to walk into the dining room on his arm with the eyes of all the passengers on us as we entered, these are the kinds of moments I will treasure always. The captain's table for eight was decorated with beautiful flowers and we were treated like royalty with white-gloved waiters placing silver-domed covered plates in front of us all served at the same time. It was quite magical with wonderful food and flowing champagne. This was definitely one of the highlights of the cruise.