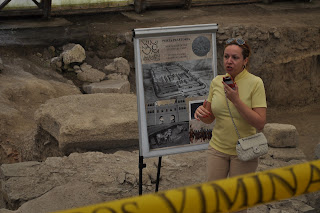 04 June 2011 - This morning we arrived in Kostolac, Serbia. After breakfast I was anxious for today's tour which was a visit to the archaeological site of Viminacium.

Viminacium was devastated and destroyed in the middle of the 5th century, and it remained forgotten and buried like Pompeii, which disappeared under a flood of lava from Vesuvius in 79 A.D. That analogy and the recognition that the remains of the Roman town and the military camp represent a site of exceptional interest explains why Viminacium has been called the Balkan Pompeii. What distinguishes Viminacium from other archaeological sites and makes it particularly important is the exceptional wealth of finds contained already in its surface, arable layer. As a result, more than 13.500 graves have been explored in the past twenty-five years and more than 32,000 finds have been deposited in the vaults of the Museum. 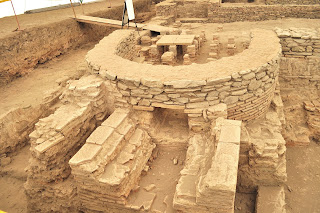 However Viminacium lies in the way of the expanding strip mine "Drmno". The experts and authorities, though aware of the importance of energents for the development of the country, are nevertheless trying to find means to preserve as large a part of the site of Viminacium as possible, for they consider it an exceptionally valuable testimony of the past which should be bequeathed to the future generations. According to the planned development of the "Drmno" strip mine, the zone of the Roman town and the military camp will not be endangered before 2040. Viminacium, however, covers as area of more than 450 hectares, and the town is directly menaced by the advancing mine. 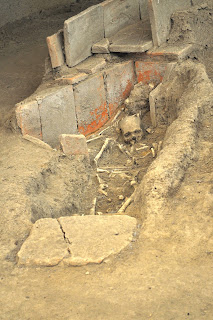 Some exceptional monuments are located in this area. They include an aqueduct nearly 10 kilometers long, some late classical basilicas, agricultural estates of Roman veterans, villae rusticae, and Roman roads which connected Viminacium with the neighboring towns. Some of these monuments have been discovered by the methods of remote detection, the analysis of aerial photos, geo-radar and magnetometric examination, and some have been archaeologically explored.

I found it incredible to not only see artifacts of this ancient town but to see actual skeletons lying there only a few feet where I walked! This was truly amazing.

We returned to the ship for lunch and set sail at noon for Donji Milanovac, Serbia. After a full lunch it was nice to go on deck and watch the small villages slide by as we sailed along the Danube.

We arrived in Donji Milanovac, Serbia at around 7pm. Dinner this evening started with melon and Prosciutto then a rich cream of sweet corn soup. The main course I chose was beef Stroganoff which was wonderful. Dinner could not be complete without chocolate ice cream topped with whipped cream.

After dinner we were entertained by the Triola Band from Skadarlija playing Old Town Music.
Posted by Grand Explorer