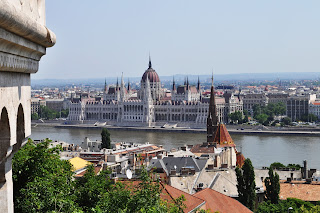 31 May 2011 - Today we arrived in Budapest. I had to get up real early in order to see us sail past the Parliament building which is a major monument in Budapest and I wanted some great photos! It was so amazing to finally sail past this wondrous sight that I had seen in so many books in the past year. The city is bursting with cafes and shops big and small and it is so stupendous to see the Danube flow on it's banks.

One side of the Danube is Buda and the other side is Pest, these are separated by many bridges. The mosy popular one is Chain Bridge which has a pedestrian walkway and has these massive stone lions guarding each entrance.

We departed at 9am for our tour of Budapest and boy there was a lot to see! We visited the Castle District which is high on a hill with great views of the city, I got some great shots from there! Castle Hill is a 1,5km long hill, overlooking the Danube, located in Budapest’s No1 District. The Old Town occupies the larger part of Castle Hill – it is also referred to as the Buda Castle; the Royal Palace occupies the southern portion. Because of its medieval origins, 17th and 18th centuries monuments, and its historical significance, the Old Town is Budapest’s primary tourist attraction. It is on UNESCO’S World Heritage List. 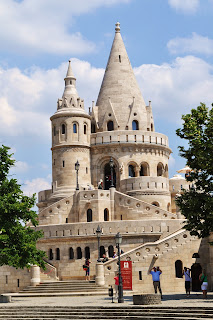 The most important sights in the castle are the Mátyás Church, the Fishermen’s Bastion and the Royal Palace. Walking along the medieval streets of the Old Town one comes across numerous historic dwellings, public buildings as well as many museums. The Castle offers wonderful panoramas of the Danube, its bridges, and of the Pest side. The Old Town can be comfortably approached on foot via a track under the Fishermen’s Bastion, via the funicular railway, or by bus.
The Neo-Romanesque Fishermen’s Bastion, located behind the Mátyás Church, was erected between 1895 and 1902, on a site where previously the medieval castle walls had stood.  The structure, which is a prominent landmark in the city, was designed by Frigyes Schulek.

After the tour it was back to the ship for lunch and to relax. Dinner onboard was great as usual.