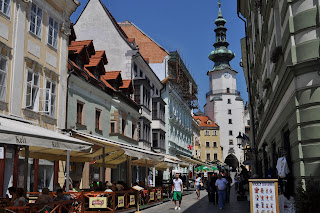 30 May 2011 - Today after another great breakfast we arrived in Slovakia. Our tour took us to the capital city, Bratislava.

This city is so quaint and medieval, it even has a castle sitting on top of a hill. Bratislava was once the capital of Hungary for over 300 years. It is quite a fairytale place. It was founded in the 2nd century BC. There is an Old Town section which is two interlinked squares. In one squaqre you can see a fountain and antique statues. There is a structure called Michael's Gate which is the only gate remaining from the medieval fortifications. It is stunnng with it's baroque facade. The city is small and quaint so it is easy to see all the main sights in one day.


Casanova loved Bratislava and declared it the most beautiful city in Europe. It is filled also with beautiful people who really seem to enjoy life. 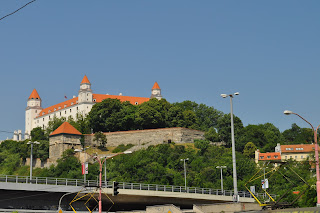 We also visited the Franciscan Church which is Bratislava's oldest religious buildings. It has magnificent stained-glass windows and impressive statues. It was here that knighting ceremonies were performed. The altar is wonderfully decorated and you get such a sense of peace in here.

Then we were off to see Bratislava Castle for an extraordinary vantage point to get a panoramic view of the city. It truly was a fascinating vista. You could see for miles the tiny cobbled-stoned winding streets, the red-tiled rooftops and dozens of varieties of colored flowers all perched along the beautiful Danube river. The castle, on a hill above the old town, dominates the city of Bratislava. It features in the first written reference to the city, which appears in the Annals of Salzburg of 907, in association with a battle between Bavarians and Hungarians.
The castle hill was populated as early as the late Stone Age; its first known inhabitants were the Celts, who founded a fortified settlement here called ‘Oppidum’. 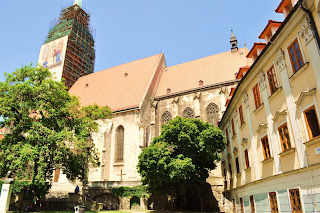 We then went to St. Martin's Cathedral. These churches that are hundreds of years old are so magnificent that words can't describe how stupendous and monumental they are. St. Martin's was built from the 13th to the 15th century. They are making renovations to the outside tower so it did have some scaffolding but the inside was marvelous.  It has four chapels: the canons’ chapel; the Gothic chapel of Sophia of Bavaria, widow of the Czech King Wenceslas IV; the chapel of St Anne; and the baroque chapel of St John the Merciful. The portal of the southern antechamber represents the oldest example of Renaissance architecture in Slovakia. Between 1563 and 1830 St Martin's served as the coronation church for Hungarian kings and their consorts, marked to this day by a 300-kg gilded replica of the Hungarian royal crown perched on the top of the cathedral's 85-metre-tall neo-Gothic tower. At the beginning of September each year the pomp and circumstance of the coronation returns to Bratislava in a faithful reconstruction of the ceremony.
We were back to the ship around 1pm to rest and have lunch and the afternoon was at leisure. Dinner was at 7pm and in the evening I caught up with emails and my blog.
Posted by Grand Explorer