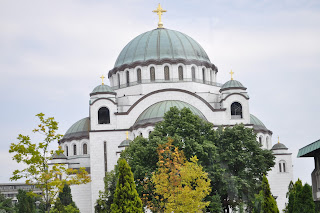 03 June 2011 - We arrived in Belgrade, Serbia at about 7am. Need-less-to-say I was still asleep until 8:30am. The breakfast buffets onboard are fantastic. They have several kinds of cereals and fruits to choose from, oatmeal as well. Then you have hot scrambled eggs with crisp bacon and pancakes; you can also have a made-to-order breakfast of a variety of omelets or eggs benedict......fresh orange juice to top it all off and if you want some cheese, it's there as well next to baskets of muffins and croissants with European jams aplenty. After the morning feast it was off to explore another new city. Belgrade.

Belgrade is not a beautiful city - even Belgraders agree on that - but it is an interesting city that's full of hedonism, passion and finesse. Architecturally, it's a mishmash of two centuries of grandiose buildings and ugly Soviet-style concrete blocks. Perched between the Danube and Sava Rivers, the ancient Kalemegdan Citadel has always sought (not always successfully) to protect the city. Leading from it into the city heart is the princely Knez Mihailova, a street of restaurants, bookshops, galleries and shops full of pretty things. Belgraders love to shop and party, which probably developed as an antidote to the numbness of the Milošević years.


Belgrade is the capital of Serbian culture, education, science and economy. As a result of its tumultuous history, Belgrade has for centuries been home to many nationalities, with Serbs of the Orthodox Christian religion making up the majority of the population. The official language is Serbian, while visitors from abroad can use English to communicate. 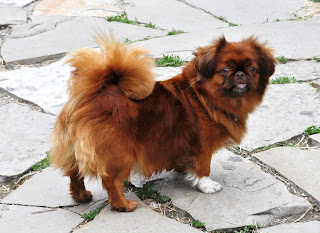 Once we finished our tour we went back to the ship for lunch. Lunch is also buffet style but there are a ton of hot and cold choices including roasts and great soups with fresh baked breads. The desserts are phnominal and unfortunately we are all indulging.

In the afternoon we we free to visit on our own. I walked around and mingled with people and found a cute lil Serbian dog to photograph. I have been making a collection of one special dog photo from each location I visit which I feel will be fun when all grouped together.

I was a bit tired this afternoon so a short nap was in order. I always get sleepy around 4pm and then wake up refreshed around 7pm to get ready for dinner. Speaking of dinner tonight I chose a seafood salad, a Serbian cream of potato soup followed by BBQ Norwegian Salmon. Of course no meal is complete without dessert and tonight I had a chocolate mousse with fresh fruits.