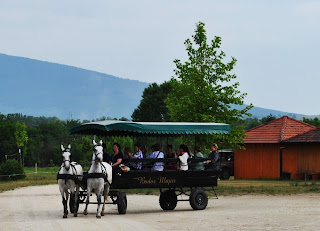 01 June 2011 - Today we were in Budapest for another day. Right after breakfast we went on a real different tour out to the Puszta to see a horse show.

We exlored the vast Hungarian landscape on our half-day visit to the Puszta which literally means “plains”. Designated as a UNESCO World Heritage Site, our tour of the Puszta began in Domonyvölgy. We drove for about 45 minutes befgore we reached this ranch and we were greeted by a handsome cowboy. We then got on covered wagons pulled by two horses to be led to the main building. We had so much fun laughing and cracking jokes, a good time.


They gave us upon arrival a pogaca (salty scone) and the traditional Hungarian welcome drink  palinka (fruit brandy). That stuff is lethal, it is 50% alcohol!! When you drink it you can feel the heat going down your throat and then it feels like your chest is on fire. They all make their own home made version and drink this stuff like it was water...hahahaha. 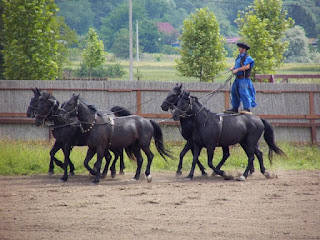 As the Puszta was originally inhabited by cowherds, horse herders, and shepherds, we were treated to an equestrian extravaganza. The horse show was very interesting and these Hungarian cowboys’ skills, including demonstrations of


pyramid riding and competitions between the horsemen was really fun to watch.

At one point they showed how their horses were well trained; they had them lay down on cue and then sit on their hind legs, was great. Then they had a  demonstration with large whips that make cracking noises as they are snapped. There was even a cute donkey pulling a cart. 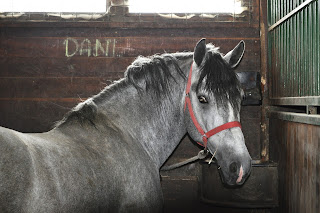 Following the show we went to visit the stables to see the Lippizzaner horses since they are bred and trained here. They also had all kinds of other animals to see. There were water buffaloes, goats, chickens and a turkey all in the middle of hundreds of acres of land which belonged to the rancher. After the tour we headed back for our ship.

I had lunch onboard and dinner as well and when it was dark I decided to go take pictures of the chain bridge which is the world famous main bridge in Budapest.

I walked along the embankment of the Danube with the city all lit up reflecting on the water, it was truly magical. As I got closer to the bridge I could see the massive stone lions at the entrance all lit up, so beautiful at night. 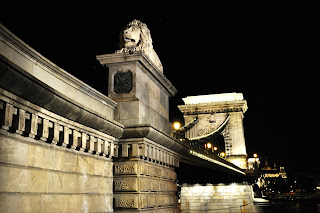 I walked the entire length of the bridge from the Buda side t the Pest side and walked around for a bit taking pictures of some monuments there. There were lovers walking on and off the bridge and strolling along the Danube, it was a warm and romantic night.

I then walked back across the other side of the bridge, taking more pictures and leisurely mace my way back to the ship. By now it was close to midnight and most people were gone to bed. I made my way to the cabin and opened my patio door to marvel at the beautiful bridge I had just crossed. Waves flowed on the Danube. I finaloy got into bed turned out the lights and for a little while I gazed out at this fascinating city glowing in the Danube and then fell asleep thinking of the next adventure that lay ahead.
Posted by Grand Explorer