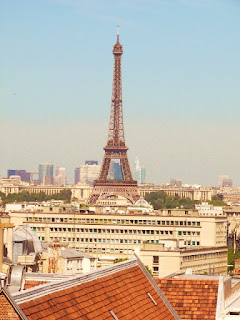 23 May 2011 - Well I am finally in Paris beginning the first leg of my journey! The flight was really great, beautiful plane and great service. I was lucky I was in a window seat and no one booked beside me. They offered free champagne and drinks on the plane and I took full advantage of that little perk I'll tell ya...lol "Do I want champagne?" (Is the Pope Catholic?  hahaha) And keep it coming Sparky!

Arrived in Paris at 8:30am and my driver was promtly waiting for me with a card with my name on it, actually spelled right also. Off we went to beautiful Paree.


Beautiful Paree came after a traffic jam however in a tunnel and for the first 35 minutes of highway driving, the surroundings looked like I could have been in any big North American city. Finally 45 minutes later the vestiges of the city started to come to light. I was driving through tree-lined streets filled with Haussman style architecture, high wooden doors with large brass handles separating the commoners from the sublime apartments of la rue Montaigne. Flowers filled the window boxes and green was everywhere in the 75 degree weather. 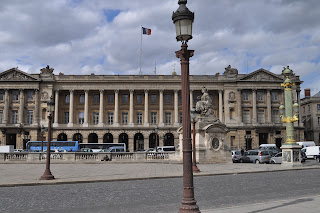 We whipped pass Place de La Concorde where the guillotine once stood. I couldn't help but reflect upon the contrast that in one century a villager was being beheaded here for stealing a loaf of bread, and in another, here was a Canadian tourist on her way to her apartment longing to go buy some. I was just glad to be in the RIGHT century!

Finally I arrived to my home for the next 5 nights. I took my bags up to the 9th floor, walked down a small hallway and there it was, what I had so long waited for, my little home in Paris. I opened the door and was surprised to see a woman there til I saw it was the maid just finishing up. 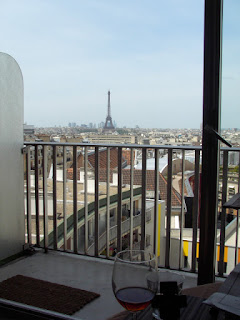 Then I walked in and my jaw dropped to see the magnificent sight I had been so anxious to see since we first met 35 years ago.....La Tour Eiffel in all it's splendour basking in the sun. No world icon is as famous as this stately structure and I couldn't stop staring at her while the smell of flowers surrounded the balcony. The photo here was taken from my balcony.

This would be fun, I loved the place and plus it has pink toilet paper! lol

I was very tired after not sleeping on the flight so I took a nap for a few hours (big mistake since it's now 4:00am and I am wide-awake...lol)

When I got up I went to get provisions and it was fun going to the Monoprix a 5 minute walk from the apartment. They sell clothes and pharmaceuticals, jewelry and everything else imaginable and the lower level is their food mart. Off I went to get my loot. I bought some amazing Duck pate and some amazing looking crusty bread. I couldn't resist buying a mini quiche lorraine as well as some chocolate croissants for breakfast. Added some great looking Camenbert cheese and some sliced ham and 44Euros later I was done. 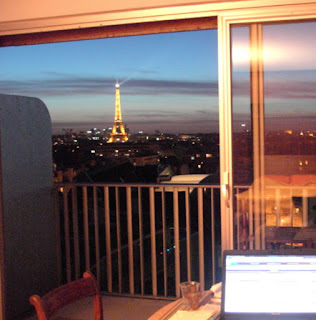 By the time I came back to the apartment it was 8:30pm so I opened up my gift bottle of French red wine, heated up my quiche, sliced some bread and took some slices of camenbert out to the balcony for an open-air feast....ahhhh c'est la vie!

Had to get some work done and made a few calls but overall I wanted to relax and get my body to appreciate the Paris timeclock (considering my body hasn't appreciated anything in the past 20 years that was a feat in itself...lol)

Tomorrow is a sightseeing day for photo taking.....look out Paris, "kid kodak" is on the prowl.

Well it is now 4:45am and the birds are starting to sing....so funny because my lil canary usually wakes me up in the morning, I love that and thought I would miss it and here they are singing away.....unreal....I feel very blessed.

I will watch the sunrise and then go to sleep for a few hours......check in tomorrow!