25 May 2011 - What a day I had today! I spent 9 hours walking around the city, getting in and out of metros, walking up hundreds of stairs and after visiting La Conciererie and Notre Dame cathedral, with a newly formed blister under my foot I collasped back at the apartment. 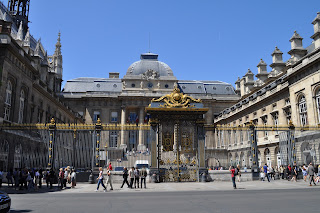 My first stop was La Conciergerie which was the prison where Marie Antoinette was housed prior to her execution. Entering the building was quite an experience seeing the vaulted ceilings which for me represented history which centuries ago it represented for so many the gruesome holding unit until execution by the guillotine. You can see the rooms were the guards were and several cells. Even then there was a class system for the cells. If you were poor you got a cell with straw on the floor to sleep on. If you had a bit more money you got a small cot which wasn't much but at least you were off the floor. Then if you were wealthy you got a bigger cell with a regular bed and a small writing desk.

Here many prisoners were tortured to death. Under Louis XIV the held witch trials and the unfortunate ones who were accused of conspiring with the devil met their fate here. 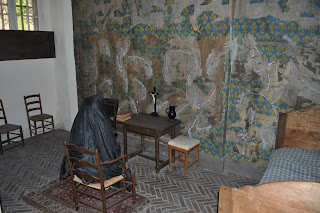 Marie Antoinette's cell was larger and outfitted with a desk and chairs and a separate room housed her two guards. Her trial opened on the 15th. of October 1793, on the morning of the 16th. she was sentenced to death. At 11 am she was led to the guillotine, and at 12:15 was executed on the plaza known today as Place de La Concorde.


Next I sat at the Cafe de Notre Dame and had the greatest "chicken club" which is in fact a baguette filled with fresh chicken topped lettuce and mayo, really delicious. I ordered a diet Coke which is called CocaCola Light here but at 5.6 Euros I am not indulging my addiction! Even at the stores each small bottle is 2.9 Euros! 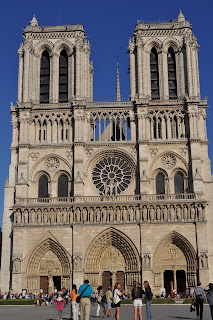 My next adventure took me to Notre Dame Cathedral. What a magnificent church this is! The stained glass and the chandeliers all sparkle under the glow of the thousands of candles lit by visitors from all over the world. I lit one and also bought a glassed candle to take home. I also spoiled myself and bought the most beautiful crystal rosary beads. While walking thru the church I came across a priest and I asked him to bless the cross I was wearing and my rosary and he eagerly obliged.....very special to me.

Then I was off the take photos of the famous gargoyles atop Notre Dame, this was great. I then walked across the bridge to Isle St. Louis and landed at Berthillon which is reputed to be the best ice cream parlor in Paris....well I had a 2 scoop cone for 4Euros, one coconut and one banana....unfortunately I found it quite mediocre, too crystalized instead of creamy like back home.....so much for that reputation. 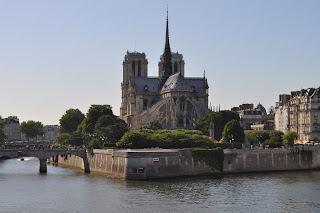 I then walked along the Seine and watched the bateau-mouches boats sail buy until I reached a great vantage point to tak pictures of the back of Notre Dame.
There is a bridge there where there are thousands of small locks attached to the wiring. It is the custom for lovers to write their names on a lock, attach it to the fence and then throw the key in the river in order to have lasting love.....ahhhh only the Parisians could think of that one  :o)


I made the obligatory stop at some souvenir stalls and of course picked up a few items like prints and a Paris tote, kitchy but fun.

I finally made my way back home exausted from the heat and the endless walking in the metros, I think I might hop on the bus tomorrow.

It 's now my bed time so until next time......bonne nuit!
Posted by Grand Explorer